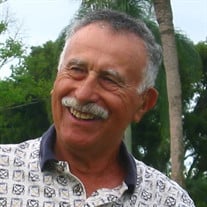 ADRIAN - Xenophon “Xen” Skufis, physician, husband, father, grandfather, great-grandfather, and fishing, golfing, bonsai, and cycling enthusiast, departed for his final bike ride on June 1, 2018. He is preceded in his journey by his parents but waves back to his wife of 65 years, Eleanor, his sister Marilynn , three children (Renee, Paul, and Jim), five grandchildren (Charlie, Matt, Sarah, Neil, and Paula), and six great-grandchildren, plus countless friends whose lives he has touched. Xen was born on August 13, 1927 in Detroit, Michigan, where he attended Cass Tech High School. At the age of 18 he was inducted into the US Armed Forces just as the Second World War was ending, and spent his time in the military helping to discharge the thousands of veteran’s returning from overseas. After his service, he entered college, first at Wayne State University and then the University of Michigan, where he earned his medical degree. It was while at U of M that he met his future wife, Eleanor Parshall, who was also pursuing her medical degree. They married on June 13, 1953, the very same day that they graduated from U of M Medical School. The newlyweds moved to Adrian, Michigan where Xen established a successful family practice and gained privileges at Bixby Hospital. During his 35 years of medical practice, Xen performed thousands of surgeries and delivered hundreds of babies. He took great pride in the fact that he never turned a patient away because they couldn’t pay. After retiring from practice, Xen devoted his life to travelling with Eleanor, being the world’s best grandpa, and his passion for bonsai, fishing, RC airplanes, wine making, and bicycling. He spent uncounted hours at MSU’s Hidden Lake Gardens as a volunteer in the care of their bonsai collection, donating his own bonsai collection to them. Xen was an avid bicyclist and would ride 10 to 14 miles a day, nearly every day, right up into his 90s. His favorite release was to ride on the Kiwanis Bike Trail between Adrian and Tecumseh. To remember Xen, a gathering of his friends and family will be held at Wagley Funeral Home on June 5, 2018 from 11 a.m. to 1 p.m. Burial will be at Lenawee Hills Memorial Park in Adrian. In lieu of flowers, Xen’s family requests that donations be made to Hidden Lake Gardens (https://www.canr.msu.edu/hiddenlakegardens/join_give/) in Xen’s name. Online condolences and memories may be shared at www.WagleyFuneralHomes.com.

The family of Dr. Xenophon Skufis created this Life Tributes page to make it easy to share your memories.

Send flowers to the Skufis family.