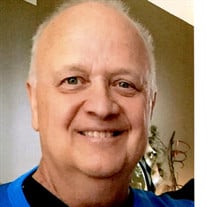 William Alan Wright was born March 5, 1952 in Traverse City, Michigan to Alan and Rita Ockert Wright. As local festival fireworks illuminated the sky on Saturday, August 4, 2018, he passed from this world to find his place in heaven after a courageous battle with pancreatic cancer. He was 66 years old. He graduated from Kingsley High School and received advanced degrees from Central Michigan and Eastern Michigan Universities. The majority of his career was in public finance in the educational setting and consulting. He served as assistant superintendent for finance and administrative services at Lenawee Intermediate School District, several public school finance directors, and as a consultant for Plante Moran. In retirement, he became an avid cyclist, upland bird hunter, fly fisherman, and enjoyed an occasional round of golf. Futures trading added to his cerebral interests. William (Bill) leaves his wife, Marcia, a son Aaron, Ann Arbor, MI two stepchildren-Zachary Compton, Chicago, Illinois and Jennifer Compton, Adrian, MI , his mother Rita Wright, Kingsley, MI , a sister, Carolyn (James) Kik, Honor, MI and two brothers, Samuel (Cathy) Wright, Caledonia, MI and Thomas (Robine) Wright, Springfield, Ohio along with many nieces and nephews. His father preceded him in death. Cremation has taken place. A visitation will be on Friday, August 10 from 2-7 PM at the Wagley Funeral Home in Adrian, Michigan. A Catholic prayer service will take place at 6:30 PM. Funeral services are Saturday at 11 AM at First United Methodist Church in Adrian. The family will greet guests at the church one hour prior to the service. Memorial contributions may be given to two organizations Bill admired and supported: Trout Unlimited and The Daily Bread of Lenawee or Adrian First United Methodist Church. Online condolences and memories may be shared at www.wagleyfuneralhomes.com.

William Alan Wright was born March 5, 1952 in Traverse City, Michigan to Alan and Rita Ockert Wright. As local festival fireworks illuminated the sky on Saturday, August 4, 2018, he passed from this world to find his place in heaven after a... View Obituary & Service Information

The family of William A. Wright created this Life Tributes page to make it easy to share your memories.

Send flowers to the Wright family.