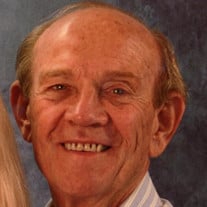 ADRIAN – William J. Ross, Ph.D., age 80 of Adrian, passed away Thursday, April 18, 2019, at The Oasis at Adrian Rehabilitation and Healthcare Center. He was born December 4, 1938, in DeTour, Michigan, the oldest of the seven children of Charles and Blanche (Polaczyk) Ross. He earned a Bachelor’s Degree from Michigan State University, a Master’s Degree from Western Michigan University as a Mott Intern, his Education Specialist Degree from Eastern Michigan University and a Ph.D. from the University of Michigan. On June 20, 1964, he married Barbara Dull, at the Methodist Church in Nashville, Michigan, and she survives. After working as principal for Sand Creek Schools, Bill was approached by Milton C. Porter to work on establishing what is now the Lenawee Intermediate School District. Bill worked tirelessly in this endeavor and was instrumental in passing the first of many millages. From 1966 to 1971, he was the Director of Vocational Education for Lenawee and Adrian Public Schools. He then went to Byron Area Schools as their superintendent from 1971 to 1978. He returned to Adrian to serve as the superintendent at Lenawee Intermediate School District from 1978 to 1998. Bill held many leadership positions including serving as President of the Michigan Association of Intermediate School District Administrators, President of the Region VIII MASA as well as on the State Association Governing Council, and as a member of the State Board of Education Michigan Accreditation Program Advisory Committee. Locally, he was a long-time member of the Adrian Rotary Club and more recently a member of Civitan. Bill also served on the boards of the YMCA, the Salvation Army and Goodwill. Bill and Barbara were snow birds for many years in Venice, Florida, and had wonderful memories from their various travel adventures together. In addition to Barbara, his wife of almost 55 years, he is survived by their daughter, Elisabeth; siblings, Eugene (Polly) Ross, Nancy (Bill) Curley, Dorrie Ferguson, Margaret (Lynn) Adams, Lyle (Cindy) Ross and Roy Ross (Pat Wing); sister-in-law Betty (Forest) Rogers; and numerous cousins, nieces and nephews. He was preceded in death by his parents; a daughter, Brenda; and his mother and father-in-law, John and Montiel Dull. Funeral services will take place at 1 p.m., Wednesday, April 24, 2019 at Wagley Funeral Home with Rev. Christopher Brundage. Visitation will be held at the funeral home on Tuesday from 4 to 8 p.m.

ADRIAN &#8211; William J. Ross, Ph.D., age 80 of Adrian, passed away Thursday, April 18, 2019, at The Oasis at Adrian Rehabilitation and Healthcare Center. He was born December 4, 1938, in DeTour, Michigan, the oldest of the seven children of... View Obituary & Service Information

The family of William J. Ross Ph.D. created this Life Tributes page to make it easy to share your memories.

Send flowers to the Ross family.