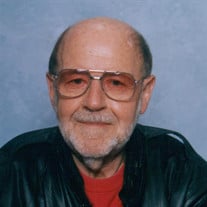 ADRIAN – William “Lou” Miller, Jr., age 92 of Adrian, passed away Thursday, December 6, 2018, at his home. He was born September 29, 1926 in Blissfield, to William and Kathryn (Stockberger) Miller and graduated from Blissfield High School in 1944. After graduation, he joined the United States Navy serving his country during World War II. On June 8, 1957, he married Wynona Six, and she preceded him in death. Lou worked for the New York Central Railroad for 40 years where he started as a freight agent and retired as an engineer in 1988. He was an avid dog-lover who never met a dog he didn’t like. He enjoyed watching and feeding the birds, and had a green thumb with the ability to take a plant and keep it growing for years. Lou was a faithful Blissfield Royals football, baseball and basketball fan who also loved watching pro and college sports. At least twice a year, he headed to Las Vegas to gamble and locally he had fun playing the lottery. He was a well-known customer at both Bob Evans Restaurant and Morning Fresh Bakeries where he enjoyed all the friends he had made. He was a member of American Legion Post #97, Blissfield VFW and the Brotherhood of Locomotive Engineers. He is survived by a daughter, Judy Billington of Devils Lake; grandson, Jon (Cindy) Billington; great grandchildren, Chelsea and Andrew Billington; and great great granddaughter, Lillyanna. He is also survived by his soul mate of 32 years, Sharon McDonald and her children and grandchildren who welcomed him into the family and included him in all family functions. Special thanks to the Bixby Hospital nurses and the staff of Promedica Hospice. Funeral services will take place at 11 a.m., Monday, December 10, 2018, at Wagley Funeral Home with Rev. Ned Newlin officiating and military honors conducted by VFW Annis Fint Post #1584 and American Legion Post #97. Burial will follow at Oakwood Cemetery. Visitation will be held at the funeral home Sunday from 1 to 7 p.m. and again Monday from 10 a.m. until the service. Contributions in memory of Lou are suggested to Lenawee Humane Society or Promedica Hospice. Online condolences and memories may be shared at www.WagleyFuneralHomes.com.

The family of William "Lou" Miller Jr. created this Life Tributes page to make it easy to share your memories.