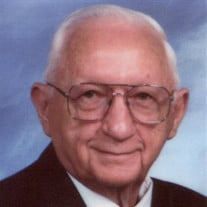 ADRIAN—William ‘Bill’ T. Marx, 89 of Adrian, went to his Heavenly home on Saturday, September 23, 2017 under the loving care of his family and Hospice of Lenawee at Lenawee Medical Care Facility. Born on June 12, 1928, in Pittsburgh, PA, he was the son of the late Arthur L. and Elizabeth (Moynihan) Marx. He attended Detroit Cooley High School. He proudly served our country, in the Army Air Force from 1946 to 1949, just after WW II ended. On June 12, 1954, he married Virginia Fox in Adrian, she survives. Bill’s first love was flying and he was a member of the Civil Air Patrol. He became the first Auxiliary Policeman for the city of Adrian. Bill worked for 27 years at Tecumseh High School in the maintenance department, retiring in 1987. Golf and reading were favorite past times of Bill’s. For several years after he retired, he was an escort for the Bixby Hospital Auxiliary. Bill was a devoted member of Turning Point Church. Survivors include his wife of 63 years, Virginia ‘Ginny’’; his daughter, Susan (Brian) Eklund; his grandchildren, Brian J. (Angelene) and Elizabeth (Rick) McAllister; great-grandchildren, Liam, Hannah, Leif and Lucy; and his sister, Marguerite (Ira) Smith. Bill was preceded in death by his parents and brothers, Bob and Art. Memorial services for Bill will be Saturday, September 30, 2017 at 4 pm at Wagley Funeral Home with Rev. Christy Shaw officiating. Visitation will be from 2 pm until the 4 pm service. Full military rites will be conducted by the Annis-Flint Post #1584 and the American Legion Post #97 of Adrian at the funeral home. Burial at Oakwood will happen at a later date. Memorial contributions may be made to Hospice of Lenawee, Adrian Senior Center or Turning Point Church. Online condolences and memories may be shared at www.WagleyFuneralHome.com

The family of William T Marx created this Life Tributes page to make it easy to share your memories.

Send flowers to the Marx family.