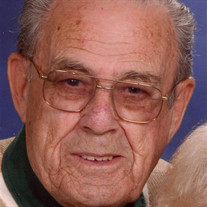 ADRIAN—William ‘Bill’ Lorenc, age 88 of Adrian, passed away Saturday, April 1, 2017 at the Hospice of Lenawee Home under the loving care of his family and Hospice. Bill was born on January 13, 1929, to Emory and Anna (Meszaros) Lorenc in Toledo, OH. He proudly served his country in the Army. On August 31, 1957, he married Rose Hegedus in Toledo, OH. At one time Bill belonged to the Hungarian, Polish, Sokol and Ukrainian Clubs, he was proud of his Hungarian heritage. He also belonged to the Toledo V.F.W. Post 4906. Bill was an avid gardener, specializing in tomato and wild horse radish plants. In addition, he was a wild mushroom expert. Bill was a member of St. Joseph Parish, Adrian. In addition to his wife of 59 years, Rose, Bill is survived by his children, Agnes (James) Nardone of Trenton, MI, Bill (Shar) Lorenc of Adrian, Mary Lorenc Nusbaum of Toledo; grandchildren, Brooke Anna (Jason) Steele, Andrew Nusbaum; step grandchildren, Wendy and David Crosby; and his sister, Viola Hoffman. He was preceded in death by his parents and 10 siblings. Mass of the Christian Burial for Bill will be at 11 am, Tuesday April 4, 2017 at St. Joseph Catholic Church, Adrian, with Rev. Kurian Kollapallil as celebrant. Burial will follow at St. Joseph Cemetery. The family would like to express special thanks to Hospice of Lenawee and Dr. Decker for their wonderful care shown to Bill. Memorial contributions may be made to Hospice of Lenawee. Envelopes will be available at the church. Arrangements are entrusted to Wagley Funeral Home, Adrian, where online condolences and memories may be shared at www.WagleyFuneralHome.com

The family of William Lorenc created this Life Tributes page to make it easy to share your memories.

Send flowers to the Lorenc family.