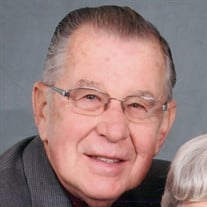 MANITOU BEACH – William A. Holtz, age 84 of Manitou Beach, passed away Wednesday, June 13, 2018, at his Devils Lake home. He was born June 4, 1934, in Adrian, the only son of Elmer and Nelda (Matthes) Holtz. After graduating from Adrian High School in 1952, he attended Western Michigan University. Bill served in the United States Army. On June 23, 1956, he wed Julia Kirk, and they were blessed with almost 62 years of marriage. Bill retired from American Chain & Cable with 30 years of service. During his retirement, he owned and operated Bill’s Market in Adrian. He was a faithful member of St. John’s Lutheran Church where he served as an elder and cemetery sexton. Bill was also a member of Adrian Jaycees. Bill delighted in his family and enjoyed watching his grandchildren’s special events. Bill enjoyed people and his sense of humor was always present as he liked to tease others. If you were being razzed by Bill, you knew he considered you a friend. In addition to his wife, Julie, he is survived by their three sons, David (Debbie) of Adrian, Brian (Jolene) of Diamondale, and Todd of Hillsdale; a sister, Marjorie Gildner of Dexter; eight grandchildren, Riley, Morgan, Celeste, Tyler, Austin, Emily, Joshua and Bailee; and six great grandchildren. He was preceded in death by his parents. Funeral services will take place at 11 a.m., Saturday, June 16, 2018, at St. John’s Lutheran Church with Rev. Joel Sarrault officiating. Burial will follow at St. John’s Lutheran Cemetery. Visitation will be at Wagley Funeral Home on Friday from 2 to 4 p.m. and 6 to 8 p.m. Memorials are suggested to St. John’s Lutheran Church. Online condolences and memories may be shared at www.WagleyFuneralHomes.com.

MANITOU BEACH &#8211; William A. Holtz, age 84 of Manitou Beach, passed away Wednesday, June 13, 2018, at his Devils Lake home. He was born June 4, 1934, in Adrian, the only son of Elmer and Nelda (Matthes) Holtz. After graduating from Adrian... View Obituary & Service Information

The family of William A. Holtz created this Life Tributes page to make it easy to share your memories.

Send flowers to the Holtz family.