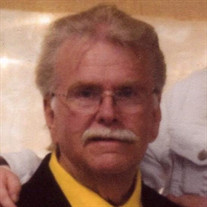 ADRIAN – William A. “Bill” Bismack, age 63 of Morenci, passed away at the Hospice of Lenawee Home, February 4, 2017 from a long battle with cancer. Bill was born in Sandusky, MI, August 21, 1953, to Albert and Eleanor (Schumacher) Bismack of Minden City, MI. He married Becky Ford of Morenci, MI October 5, 2002. Bill was most proud of the fact he was a pioneer for the Single Father Movement, keeping custody of his daughter in the 70’s. His greatest joys in life were spending time with his three grandchildren and touring the country on his motorcycle. Bill truly enjoyed playing in his golf league and rooting for the Tigers. His greatest asset was his sense of humor. He will be greatly missed by all that knew him, and all the canines in the Jasper area. Bill began his professional career cutting hair in the Metro Detroit and thumb area. Bill moved his family to Lenawee County in 1990 to pursue a career at the Postal Service in Jasper, MI, retiring in 2012 due to his illness. Surviving Bill are his wife, Becky Bismack; daughter, Tracey (Rick) Warchuck of Six Lakes, MI; son, Dustin (Charity) McCullough of Morenci, MI; brother, David (Shirley) Bismack and brother-in-law, Leo Booms, both of Warren, MI; granddaughter, Blake (Derick) Warchuck of Ionia, MI; grandson, Anthony Warchuck and granddaughter, Rylee Warchuck, both of Six Lakes, MI. Also surviving are in-laws, Donelda Ford of Morenci, MI, Randy (Lynn) Ford of Schoolcraft, MI, Bob (Kathy) Ford of Morenci, MI, Ron Ford of Pittsford, MI, Roger (Carla) Ford of Morenci, MI; Nellie (Dave) Craig of Clayton, MI, Elliott (Marlene) Kolomak of Marlette, MI; and many nieces and nephews. Bill was preceded in death by his parents, Albert and Eleanor Bismack, father-in-law, Richard Ford, niece, Mandy Booms and sister, Ruth Ann Booms. Funeral services will take place at 11:00 a.m., Thursday, February 9, 2017, at Wagley Funeral Home with Rev. Lloyd Jewett officiating. Burial will follow at Packard Cemetery. Visitation will be held at the funeral home Wednesday from 4 to 8 p.m. Memorial contributions are suggested to Hickman Cancer Center, Hope Community Center, or Hospice of Lenawee. Online condolences and memories may be shared at www.WagleyFuneralHome.com.

The family of William "Bill" Bismack created this Life Tributes page to make it easy to share your memories.

Send flowers to the Bismack family.