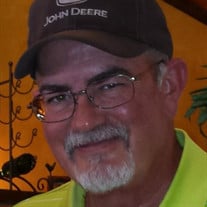 MILFORD, INDIANA- Wesley “Wes” Lynn Darting , age 57, formerly of Adrian, passed away Thursday, March 8, 2018, at his home in Milford, Indiana surrounded by his family. He was born on September 28, 1960, in Topeka, Kansas. Wes attended Sand Creek High School and went on to graduate in 1978 from Chippewa Hills High School in Remus, MI. After graduation he studied to become a skilled machinist through Vo-Tech. Wes served his country in the United States Coast Guard and was part of the crew for the Icebreaker Polar Sea Ship, and later worked at Hoosier Industrial Supply in Goshen as a machinist. On June 11, 2016, Wes married Wendi D. Street in Milford, IN, and she survives. Wes was a man of faith and a member of Cornerstone Christian Fellowship Church in Goshen where he was involved with many church activities. He was talented and could fix almost anything. Wes’ family and friends all agree that he was a gifted story teller and this often carried over into his love for golf and bass fishing. Wes and his sons have many fond memories of these times together. Wes is survived by his parents, Dick and Jane Ream , wife, Wendi, children; Christina Darting, Jacob (Rachel) Darting and Issac Darting; grandchildren, Brycin and Taylin; sisters, Jeanetta (Kerry) Ingold and Amanda (Travis) Boring, stepson, Conner, mother-in-law, Susan; nieces, Kaitlynn (Shane) O’Brien, Kathryn Boring, MacKenzie Ream and Saydie Boring; nephews, Mitchell (Kelsey) Ingold and Ethan Boring. Wes was preceded in death by his grandparents. Memorial Service for Wes will be at 11 a.m. Saturday, April 7, 2018, at First Church of the Nazarene in Adrian. Burial will follow in Dover Center Cemetery. Visitation will take place from 10 a.m. until the time of the service. Memorial contributions may be made to Wendi Darting c/o Cornerstone Christian Fellowship Church, 110 S.5th Street, Goshen, IN 46526, to assist with medical expenses. Local arrangements have been entrusted to Wagley Funeral Home, Adrian, where online condolences and memories may be shared at www.wagleyfuneralhomes.com

The family of Wesley Lynn Darting created this Life Tributes page to make it easy to share your memories.

Send flowers to the Darting family.