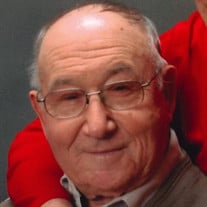 FAYETTE, OH – Wayne Revere Williams, 94, a lifelong resident of Fayette, Ohio died Sunday evening, June 5, 2022, at CHP Inpatient Hospice in Defiance. Born July 30, 1927, in Pioneer, OH, he was the son of the late Paul and Goldie (Mercer) Williams. Wayne graduated Gorham Fayette High School with the class of 1945, after notably serving as class president. He immediately then enlisted in the United States Navy, serving during World War II at the Great Lakes Naval Center, earning the WWII Victory Ribbon before his honorable discharge. Upon returning to Fayette, he married the former Verna Mae Flory on April 30, 1949, at the Wauseon First Christian Church. Wayne was a hard worker, and always had gainful employment throughout his life. In adolescence, he gathered and sold corncobs at the mill, sold magazine subscriptions, and raked leaves. Early in adulthood, he worked various jobs including as a millwright at Menna Welding in Toledo, performed carpentry for Bill Boyers, and worked for several years at the General Motors Plant in Defiance. He then locally worked for Bob Vine at the Sohio Gas station before being a dealer himself for 23 years. In 1977, he began employment with the Village of Fayette, working at the water department before his retirement in 1989. Wayne was always involved in his community. He served as bank director for Farmers State Bank in the 1960s, then Tiffin Valley National Bank for 15 years, and was on the advisory board when the same bank transitioned to First National Bank. He was a member of the American Legion John Dale Post 143, lifetime member of the Masonic Lodge 349, 50-year member of the Fayette United Methodist Church, Wauseon Elks Club member, Fayette Chamber of Commerce, and was a faithful supporter of the Fayette Athletic Boosters. He and Verna were crowned King and Queen of the Fayette Bullthistle in 1953, and was deservedly awarded Citizen of the Year in 2015. He loved to travel to Florida and Arizona, and was proud to have been present for the groundbreaking of the National WWII Memorial in Washington, D.C. He enjoyed model airplanes, gardening, and playing cards, specifically euchre, hearts, and bug. His greatest aspiration in life was to have a loving family and provide for their every need, and to meet the public in honest and faithful service in all his occupations over the years. Surviving in addition to his wife of 73 years, Verna, are a son, Mark Williams of Fayette; sister, Dorothy Clark of Angola, IN; daughter-in-law, Susan Williams of Fayette; two grandchildren, Mason Williams of De Pere, WI and Maren Williams of Fayette; a great-grandson, Wyatt Williams; two nephews, Scot Clark and Vince Clark; and a niece, Debbie Clark. In addition to his parents, he was preceded in death by a son, Michael Williams; and a brother-in-law, Brice Clark. A celebration of Wayne’s life will be held at the Fayette UMC Family Life Center on Friday, June 10, 2022, at 12:00 p.m. with Pastor Jeff Bandy officiating. The family will receive friends for visitation from 11:00 a.m. until the service begins, and will continue the fellowship immediately after the service during a luncheon that will be served. Interment will take place at a later date in Pleasant View Union Cemetery in Fayette. The family suggests that memorial contributions to honor Wayne may be made to the Fayette United Methodist Church. Arrangements have been entrusted to the care of Wagley Funeral Home, Adrian. Online condolences and memories may be shared at www.WagleyFuneralHomes.com.

The family of Wayne Revere Williams created this Life Tributes page to make it easy to share your memories.