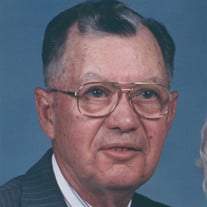 ADRIAN – Warren G. “Bud” King, age 90, of Adrian, passed away Tuesday, January 16, 2018, at his home under the loving care of his family. He was born February 27, 1927, in Adrian, Michigan, to Roy and Mary (Granger) King. After graduating from Sand Creek High School in 1945, he went on to serve in the United States Army during WWII. On June 12, 1949, Warren married Gertrude Eicher at Fairfield Baptist Church, and they were blessed with 67 years together before her death in 2017. Bud was a faithful member of Fairfield Baptist Church. He retired from the Lenawee County Road Commission with over 20 years of service. Bud was a member of the National Threshers Association where he served on the board, and also a member of the Farmers Antique Tractor and Engine Club. He enjoyed helping others by fixing and repairing anything. He is survived by his children: Bradford (Myo Yon) King of El Paso, TX, Christine (Craig) Ehinger of Toledo, OH, Marlene (John) Kussmaul, Kevin (Lori) King, and Barbara (Dennis) Rice, all of Adrian; 19 grandchildren, and 18 great grandchildren. In addition to his parents and wife, he was preceded in death by a sister, Rena Schoonover; a brother, Walter King; a cousin, Janet Granger; and a daughter-in-law, Deborah King. Funeral services will take place at 11 a.m., Saturday, January 20, 2018, at Fairfield Baptist Church with Rev. Stephen Boley officiating and military honors conducted by VFW Annis Fint Post #1584 and American Legion Post #97. Burial will follow at Lenawee Hills Memorial Park in Adrian. Visitation will be held at Wagley Funeral Home on Friday from 2 to 4 p.m. and 6 to 8 p.m. Contributions in memory of Bud are suggested to Fairfield Baptist Church or Neighbors of Hope. Online condolences and memories may be shared at www.WagleyFuneralHomes.com.

The family of Warren "Bud" King created this Life Tributes page to make it easy to share your memories.

Send flowers to the King family.