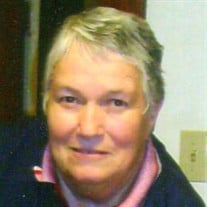 ADRIAN – W. Loretta “Cricket” Anderson, age 84 of Adrian, formerly of Blissfield, passed away Wednesday, April 3, 2019, at her home with her family at her side. She was born February 1, 1935, in Independence County, Arkansas, to Roy and Hazel (Sanders) Young, and graduated from Deerfield High School. On September 1, 1956, she married Wallace Anderson, and he preceded her in death in 1995. Cricket was well known in the community. She attended Elem3nt Church and previously served as Treasurer for Blissfield Township. She was an agent for Gleaner Life Insurance Society, and a member of the Adrian Arbor. When Cricket moved her office in with her son’s business, Autos Unlimited, LLC, she not only took care of her clients, she also managed the office and even sold cars. She was fondly called “Mom” by many. Her grandson, Matthew, was the light of her life. Cricket is survived by her son, Eric (Kellie) Anderson; grandson, Matthew Anderson; a sister, Lois “Alberta” (Jr.) Anderson of Blissfield; and numerous nieces and nephews. In addition to her husband, she was preceded in death by siblings, Wilma Vaughn, Marie Branscum, Bonnie Dickens, Menda Blain, T.R. Young, and Earl Wayne Young. Funeral services will take place at 1 p.m., Sunday, April 7, 2019 at Wagley Funeral Home, Tagsold Chapel in Blissfield with Pastor Gayle Ruble officiating. Burial will follow at Pleasant View Cemetery. Visitation will be held at the funeral home Sunday from noon until the service. Contributions in memory of Cricket are suggested to Hickman Cancer Center, Madison Township Fire Department, Blissfield Township Fire Department or Hospice of Lenawee. Online memories and condolences may be shared at www.WagleyFuneralHomes.com.

The family of W. Loretta "Cricket" Anderson created this Life Tributes page to make it easy to share your memories.

Send flowers to the Anderson family.