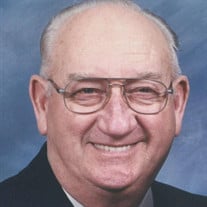 ADRIAN – Vladdie Hejl, 89, of Adrian, died Saturday evening, January 22, 2022, at ProMedica Defiance Regional Medical Center in Defiance, Ohio. He was born September 30, 1932, in Tabor, South Dakota to James and Anna (Kuzela) Hejl. The Hejl family moved to Michigan when Vladdie was 5 years old, and they settled in Blissfield where he attended school. Vladdie farmed with his father early in life and then went onto serve his country in the United States Navy from 1955-1957. On November 22, 1954, he married Marilyn Jean Dickerson in Blissfield and they have been blessed with 67 years together. After serving in the U.S. Navy, Vladdie started his own business as a residential builder. He owned and operated Vladdie Hejl Builders for 40 years. Vladdie primarily built homes and pole barns, but he was the official builder for the Broken Wheel Western Store in Madison Center and the Blissfield Hardware Store. When it was time to relax Vladdie enjoyed Western square dancing with Marilyn, golfing and fishing. Vladdie was a member of Faith Lutheran Church in Metamora, Ohio for many years. In addition to his wife, Marilyn, Vladdie is survived by his sons, Vladdie (Helena) Hejl of Adrian and Ronald (Evelyn) Hejl of Deerfield; granddaughter, Jennifer (Patrick) Curley and grandson, Stacy Hejl; 3 great-grandchildren and 2 great-great-grandchildren; and his sister, Georgiana Wagner. He was preceded in death by his parents, twin brother, Stanley; and sisters, Alice and Helenka. A funeral service for Vladdie will be held on Thursday, January 27, 2022 at 2:00 p.m. at Wagley Funeral Home, Tagsold Chapel in Blissfield with Pastor Ron Sparks officiating. Burial will follow in Ogden Township Cemetery. The family will receive friends for visitation on Thursday from 12:00 p.m. until the time of the service. Memorial contributions may be made to the donor’s choice. Online condolences and memories may be shared at www.WagleyFuneralHomes.com.

The family of Vladdie Hejl created this Life Tributes page to make it easy to share your memories.

Send flowers to the Hejl family.