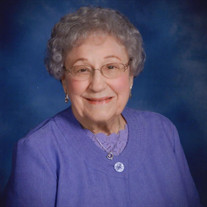 ADRIAN – Virginia “Ginny” Maxine Yansen, 95, of Adrian, Michigan, was peacefully called to be with her heavenly Father on November 16, 2020. Virginia was born June 16, 1925 on an Ohio farm to Alma and Walter Cryer. She was the youngest of six children, Donald Cryer, Ethel Wilson, Earl Cryer, Elmer Cryer and William Cryer. She and her husband George Yansen lived in Pontiac, Sand Creek and Adrian, Michigan over their 64 years of marriage. Left to cherish her memory are her daughter Johanna Lynn Bauer (Ron), her grandchildren, Barrett Lewis (Eileen), Ron Bauer (Karen Anderson), Lisa Wade (Bryant), and Amy Mendeljian (Grant) and nine great grandchildren, Emerson Lewis, Sam Aylesworth, Lindsay Bauer, Brock Anderson, Cade Anderson, Carter Wade, Caitlyn Wade, Ryan Mendeljian and Reese Mendeljian. Ginny received her Bachelor of Education degree from Bowling Green State University in Ohio, and a Master’s degree in guidance and counseling from Wayne State University in Michigan. During her 30 years as an educator, Ginny was a music, English and social studies teacher and a junior high counselor in the Pontiac School District, Pontiac, Michigan. After retirement, she and George built a retirement home in Sand Creek, Michigan where they lived for 13 years. They then moved to Richlyn Manor in Adrian, where she lived for over 26 years before moving to Charlotte Stephenson Manor at age 93. While at Charlotte Stephenson Manor, Ginny continued to be active in community activities, her church and a variety of activities at CSM. Over her lifetime, Ginny received many honors, belonged to Apha Chi Omega sorority, Delta Kappa Gamma, and was a lifelong member of the Methodist Church (in Pontiac and Adrian), serving on numerous committees, and singing in the choir. In her retirement Ginny was also an active member of PEO, Monday Literary Club, and United Methodist Women, serving on the Annual Conference for 15 years. Ginny loved people, loved life, and lived life to the fullest. She and George loved to travel, traveling to almost all of the United States, many countries in Europe, and Australia and New Zealand. Ginny enjoyed staying in touch with her many friends and family through phone calls and sending the “perfect card” to recognize a birthday, an anniversary, a special event, an accomplishment, or to just let others know that she cared and was thinking of them. Visitation will be held at Wagley Funeral Home, Adrian on Saturday, November 21, 2020 from 12:00 - 2:00 p.m., with a funeral service following at 2:00 p.m. with Rev. Eric Stone officiating. Memorial contributions may be made to the Yansen Education Scholarship at Adrian College or to Adrian First United Methodist Church. Following the Governor’s executive order, all attendees are required to wear a proper face covering, with the exception of those under the age of five years old or those who cannot medically tolerate. For those unable to be present, a live streaming of the service will be accessible from Ginny’s tribute wall on www.WagleyFuneralHome.com, where a link to view the recording will be available for 90 days. Online memories and condolences may be shared at www.WagleyFuneralHomes.com

The family of Virginia "Ginny" Maxine Yansen created this Life Tributes page to make it easy to share your memories.

Send flowers to the Yansen family.