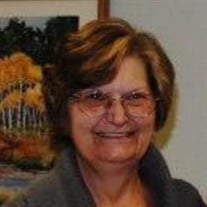 ADRIAN- Vicki Lynn (Dinse) Gogolin, 69, of Adrian, died Friday, September 25, 2020, at St. Joseph Mercy Hospital Ann Arbor, following many years of ailing health. She was born June 24, 1951, in Tecumseh, the daughter of the late William “Bill” and Joann (Stevens) Dinse. Vicki was a 1969 graduate of Madison High School and worked for several years at the former Fayette Tubular Products in Fayette, OH. She more recently was employed as a sales consultant at Martin’s Home Center in Tecumseh. An avid University of Michigan football fan, Vicki enjoyed horse racing, reading, and crocheting, and was especially proud of her green thumb in gardening. Surviving Vicki are her four children, Shelly Fallon (fiancé Tracy Cuff) of Fayette, OH, Scott (Laurie) Gogolin of Adrian, Danielle (Lawrence) Cunningham of Archbold, OH, and Nicole (Todd) Pouillon of Seney, MI; nine grandchildren and three great-grandchildren. In addition to her father, Bill, and birth-mother, Joann (Stevens) Betz, she was preceded in death by her step-mother who raised her, Diana (Terry) Dinse. A graveside service for Vicki will be held on Thursday, October 1, 2020, at 2:00 p.m. at Lenawee Hills Memorial Park in Adrian. Arrangements were entrusted to the care of Wagley Funeral Home in Adrian. In lieu of flowers, the family suggests memorial donations be made in Vicki’s honor to the National Kidney Fund. Online memories and condolences may be shared at www.WagleyFuneralHomes.com

The family of Vicki Lynn Gogolin created this Life Tributes page to make it easy to share your memories.

Send flowers to the Gogolin family.