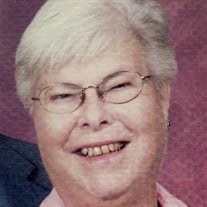 Blissfield—Vanda L. Fisher, 82 of Adrian, passed away Saturday, March 23, 2019, at ProMedica, Bixby. She was born on January 22, 1937, to Howard and Norma (Gautz) Ruhl at her grandmother, Emma Gautz’s home in Riga, MI. Vanda married Jay M. Fisher on June 7, 1958, at Trinity Lutheran Church, Riga. She graduated from Blissfield High School in 1955 and then attended Davis Business College earning an associate’s degree. Vanda was a dedicated wife and mother as well as a very proud grandmother and great grandma. She attended North Blissfield Immanuel Church where she served as a Sunday school teacher. Vanda also served on the Lenawee County fair board for 20 years. She was very proud of her position of historian. Vanda also served on the election board for Raisin Twp. and was a 4-H leader. In addition to her loving husband, Jay of 60 years, she is survived by her children, Tammy (Ken) Green, Nora (Mike) Maher, Edwin (Jean) Fisher; brother Russell (JoAnn) Ruhl; grandchildren, Melanie and Kevin Green, Yvonne and Jay Maher, Emily (Sam) Branchaw, Sylvia( Zac) Cunningham, Garrett (Megan) Fisher, Samuel, Eli, Grace, Noah, Madeline, Joseph, Stella Fisher; and great-grandchildren, Airiana and Ronen Fisher. She was preceded in death by her parents and a son in infancy, Daniel John. The family would like to thank the Raisin Township Fire Department, ProMedica Bixby Center and their staff, Rev. Gary Leking and especially Wonet and Connie for their loving care of Vanda. Funeral services will be 11 a.m., Thursday, March 28, 2019, at North Blissfield Immanuel Lutheran Church, Palmyra, with Rev. Gary Leking officiating. Burial will be private. Visitation will be on Wednesday from 4 to 8 p.m. at Wagley Funeral Home, Tagsold Chapel, Blissfield and also from 10 a.m. on Thursday until the time of the service at the church. Memorial contributions for Vanda may be made to Immanuel Lutheran Church, Hospice of Lenawee or to the donor’s choice. Envelopes will be available at the funeral home and the church. Online condolences and memories may be made at www.WagleyFuneralHomes.com.

The family of Vanda L Fisher created this Life Tributes page to make it easy to share your memories.

Send flowers to the Fisher family.