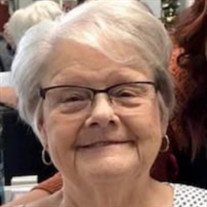 ADRIAN – Trula Dene Frederick, age 82 of Adrian, passed away early Friday morning, February 18, 2022 at home under the care of Hospice of Lenawee with her family by her side. Trula was born on July 25, 1939 in Hampton, Tennessee. She was the second daughter out of the seven children in Don and Virgie (Miller) Hyder’s family. Trula started school in Tennessee but relocated with her sister to Michigan for work. It was in Adrian that Trula was first introduced to Clyde Frederick. Clyde knew that Trula was special when he first met her; and were soon united in marriage on May 12, 1956, in Angola, Indiana. They shared over 50 wonderful years together before his passing in 2007. Trula was a wonderful homemaker and mother to their four children. She was a quilter and raised a vegetable garden for many years, where she would can the vegetables for the family to eat year-round. She worked at Adrian Skatery for awhile and the whole family enjoyed spending time there and skating several times a week. Trula had a close relationship with God and lived her faith daily. She was a lifetime member of the First Freewill Baptist Church in Adrian, where her brother, Pastor Darrell Hyder serves. She shared her talents in singing and teaching Sunday school. Trula was a friend to everyone and never knew a stranger. She is survived by her children, Keith Frederick, Kim (Tim) Roberts, Lorie (Bob) McCarty and Shawn (Trisha) Frederick; grandchildren, Corey Gaitan, Transton Frederick, Markie Phipps, Joshua Borton, Dustin Borton, Jeremy McCarty, Chad McCarty, Lindsey McCarty, Katelin Frederick, Tyler Gordon and Rebekkah Frederick; 21 great-grandchildren and siblings, Wilma (Russell) Lindsey, Darrel (Beverly) Hyder, Jim (Joy) Hyder; and sister-in-law, Sherry Hyder. Trula was preceded in death by her parents; husband, Clyde; great-grandchildren, Maesie Borton and Ollie Borton; brothers, Howard Hyder, Ronnie Hyder and David Hyder. Funeral services will take place on Thursday, February 24, 2022, at 11 a.m. at Wagley Funeral Home in Adrian, with Pastor Darrell Hyder and Don Hyder. Burial will follow at Lenawee Hills Memorial Gardens in Tecumseh. Visitation will be held on Wednesday, February 23, 2022 from 5 to 8 p.m. at the funeral home and again one hour before the service on Thursday. Memorial contributions may be made to Hospice of Lenawee. Online condolences and memories may be shared at www.WagleyFuneralHomes.com.

ADRIAN &#8211; Trula Dene Frederick, age 82 of Adrian, passed away early Friday morning, February 18, 2022 at home under the care of Hospice of Lenawee with her family by her side. Trula was born on July 25, 1939 in Hampton, Tennessee. She... View Obituary & Service Information

The family of Trula Dene Frederick created this Life Tributes page to make it easy to share your memories.

Send flowers to the Frederick family.