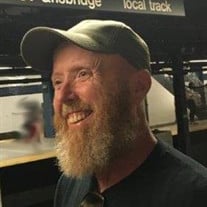 ADRIAN – Tobin S. MacBeth, age 48 of Metamora, OH, formerly of Riga, passed away Monday, December 4, 2017, at the Hospice of Lenawee Home. He was born August 14, 1969, in Toledo, Ohio to Lawrence S. and Shirley (Gallatin) MacBeth, and graduated from Blissfield High School with the Class of 1987. Tobin was an adventurous young man, who as a child enjoyed BMX bike riding, bull riding as well as bronco riding. He played little league baseball and was involved with 4-H. Tobin also liked to hunt and fish. As an adult he worked as a butcher for St. Mary’s Slaughter House and in several area stores including Country Market in Adrian and Brooklyn, Doug & Ted’s Foodland in Tecumseh and Borchardt Brothers Market in both Blissfield and Morenci. In addition to his mother, Shirley Gallatin MacBeth of Riga, he is survived by his son, Lawrence “Stone” MacBeth of Boulder, CO; siblings, L. Troy (Roxanne) MacBeth and Edith (Danny) C. Bowles II, both of Blissfield; nephews, T. Conrad MacBeth, D. Courtland Bowles III, and Elijah S. Bowles; a niece, Morgan MacBeth Powell and many extended family members. Besides his father, he was preceded in death by his grandparents, Lawrence S. and Eva MacBeth and Herschel and Edith Gallatin. Funeral services will take place at 1 p.m., Saturday, December 9, 2017 at Wagley Funeral Home, Tagsold Chapel in Blissfield with Pastor Pete Valdez officiating. Burial will follow at Riga Cemetery. Visitation will be held Saturday from 9 a.m., until the service at 1 p.m. Contributions in memory Tobin may be made to Wagley Funeral Home to assist with funeral expenses. Online condolences and memories may be shared at www.WagleyFuneralHome.com.

The family of Tobin S. MacBeth created this Life Tributes page to make it easy to share your memories.