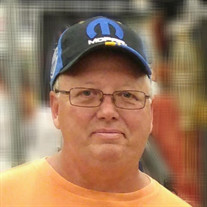 BRITTON –Thomas E. Knadler, age 61, passed away at his home on Monday, August 30, 2021, with his family by his side. Tom was the fourth of seven children, born on April 28, 1960 in Norwalk, OH to Thomas and Mary (Kraft) Knadler. He attended Blissfield High School, graduating with the class of 1978. He worked for many years for Midwest Waterblasting and also Superior Environmental Solutions since 2012. Tom belonged to the Sons of the American Legion Underwood Orr Post #34 and the Hall-Slater VFW Post #4187. Tom grew up going camping and fishing with his family and was always interested in cars. He had a couple classic cars of his own, his favorite being his 1972 “plum crazy” purple Plymouth Duster, painted purple because it’s his daughter’s favorite color. He enjoyed going to classic car shows and drag races, hunting, fishing and hanging out at the VFW where he made many good friends over the years. Tom was also an avid NASCAR fan but what he loved most was spending time with his children and grandchildren. Tom is survived by his children, Gary Knadler and Kimberly (Blane) Tanner, both of Adrian; grandchildren, Zayn Knadler, Brayden Tanner and Kenzie Tanner; siblings, Joe (Carol) Knadler, Kathy (Scott) Johnson, Patty VanLoocke, Rosie (Dan) Hudson, and Bob Knadler; lifelong friends Don Burnett and Sharon Skinner, and many nieces and nephews. In addition to his parents, he was preceded in death by his brother, Ken Knadler; nephew, Nicholas Johnson and brother-in-law, Richard VanLoocke. Tom was a great guy and a truly kind man with a wonderful sense of humor. Even when he wasn’t feeling well during his courageous battle with cancer, he had the ability to make those around him laugh. Tom was a great father, grandfather, brother and friend and he will be sadly missed… Love you more! At Tom’s request, cremation will take place. A benefit dinner will be held on September 18, 2021 at 4:00 p.m. at the American Legion Underwood Orr Post #34, in Tecumseh. A celebration of life will be held in his honor on September 19, 2021 at the Hall-Slater VWF Post #4187, 427 N. Evans St., Tecumseh, MI, from 2:00 to 5:00 pm. Arrangements have been entrusted to Wagley Funeral Home, Tagsold Chapel, Blissfield, where online condolences and memories may be shared at www.WagleyFuneralHomes.com.

The family of Thomas "Tom" E. Knadler created this Life Tributes page to make it easy to share your memories.

Send flowers to the Knadler family.