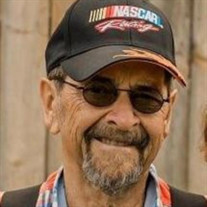 ADRIAN – Thomas “Tom” Keith Braman, age 69, of Adrian, passed away peacefully on Sunday, July 25, 2021, after a short battle with lung cancer, with his wife and daughter by his side. He was born on June 30, 1952 to Marion “Bill” and Faye (Stevens) Braman in Adrian. Tom graduated from Sand Creek High School with the Class of 1970. In December of 1970, Tom married Shirley McGregor and from that union he welcomed a son, Brandon Keith Braman in 1971. Tom was blessed to have two more children; son, William Keith Braman in 1986 and daughter, Ashleigh Nicole Rouleau (Braman) in 1987 from his second marriage. Tom was a busy and proud single dad. On September 19, 2000, he married his best friend and love of his life, Tonya Lenee Reynolds; and they have walked side by side for 21 years. A loyal brother of the Operating Engineers Local 324, Tom worked 44 years as a heavy equipment mechanic. He truly enjoyed his career and the people he worked with over the years. In addition to his loving wife, Tonya, Tom is survived by his children, Brandon (Joanne) Braman, William Braman and Ashleigh (Jim) Rouleau; stepdaughter, Heidi (Matt) Taylor; a proud papa to 13 grandchildren who he gave each a unique nickname: Jayden, Maleia, Maeryn, Kobe, Lauren, Natalie, Liam, Jaxyn, Kaylee, Cameron, Cole, Samantha and Maddox; sister, Linda Mae Braman; and niece Sarah Anne Gillen. He was preceded in death by his parents and a stepson, Robert Vincze. At Tom’s request, cremation will take place with a private graveside service. Final resting place will be at Weston Cemetery. In lieu of flowers, the family asks that donations may be made to Hospice of Lenawee. Arrangements have been entrusted to Wagley Funeral Home, in Adrian; where online condolences and memories may be shared at www.WagleyFuneralHomes.com.

The family of Thomas "Tom" Keith Braman created this Life Tributes page to make it easy to share your memories.

Send flowers to the Braman family.