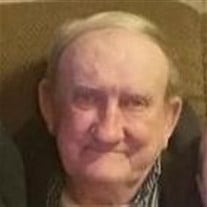 ADRIAN - Thomas B. Stevens, 77, formerly of Deerfield, died Sunday morning, November 17, 2019, at his home surrounded by his family while under the compassionate care of Hospice of Lenawee. He was born November 9, 1942, in Petersburg to Archie and Muriel Stevens. Tom was proud to call Deerfield his home for the majority of his lifetime; having relocated to Adrian in 2002. He was a graduate of Deerfield High School prior to attending Statzenburger College. Tom proudly served in the United States Army overseas during the Vietnam War Era. Upon returning stateside, he attended Wayne State University. Tom worked for General Motors at the Toledo Powertrain Plant for 30 years until his retirement in 1998. On April 23, 1971, Tom married Sue Ann Giebel in Britton, and she survives. He was a member of the Deerfield American Legion. Tom was an avid sports fan, especially for the University of Michigan teams. He enjoyed watching the History Channel, restoring old cars and assembling model cars. Tom was also a skilled woodworker, having created items such as a rocking horse, doll house, and wishing well. In addition to his wife of over 48 years, Sue, he is survived by his son, Ryan (Holly) Stevens of Tecumseh; grandchildren Emilee and Mason Stevens, who were his pride and joy; and siblings Perol Stevens of Adrian and Archie Stevens, Jr. of Deerfield. Thomas was preceded in death by his parents; sister, Muriel Mansfield; and brother, Eddie Stevens. A funeral service for Thomas will be held on Wednesday, November 20, 2019 at 2:00 p.m. at Wagley Funeral Home, Tagsold Chapel, Blissfield. Burial will follow at Deerfield Cemetery. Military Honors will be conducted by the Deerfield American Legion, Post 392. Visitation for Tom will be held prior to the service on Wednesday, from 12:00 p.m. until the service. Memorial donations to honor Tom can be made to Hospice of Lenawee. Online condolences and memories may be shared at www.WagleyFuneralHomes.com.

ADRIAN - Thomas B. Stevens, 77, formerly of Deerfield, died Sunday morning, November 17, 2019, at his home surrounded by his family while under the compassionate care of Hospice of Lenawee. He was born November 9, 1942, in Petersburg to Archie... View Obituary & Service Information

The family of Thomas B. Stevens created this Life Tributes page to make it easy to share your memories.

Send flowers to the Stevens family.