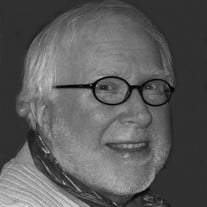 Thomas Jay Royer passed away unexpectedly on Friday, March 15, 2019. Tom was born February 21, 1944, in Fort Wayne, IN, the only child of Neva (Bailey) Royer and Max J. Royer. He grew up in Indianapolis and spent much of each summer with his Michigan cousins, Jan (Bailey) Fewins and Craig Bailey. After graduating from North Central High School, he earned a professional certificate at Don Martin School of Radio/TV in Hollywood, CA, in 1964. Tom worked for NBC affiliate WRC in Washington, D.C., as a film editor and floor director for local and national news programs and was part of the crew covering President Nixon’s 1972 departure for China from the White House lawn. He returned to Indiana in the mid-1970s, attending Butler University before beginning work as a director in Indianapolis, first for ABC affiliate WRTV, and then for the “Jim Gerard Show,” a syndicated, locally produced, TV talk show. He continued as creative director and associate producer of the Gerard Show from 1976 – 1984. In 1980, Tom began to devote much of his time to freelance writing and photography. He ultimately published more than 200 humorous and 40 non-fiction articles in local, regional, and national magazines, including the Detroit News Magazine. For nearly three years, he wrote a humor column for five weekly newspapers. He often exhibited photographs (winning a number of awards), published photo essays, provided photos for his articles, and sold photos for magazine covers, posters, and CD covers. From 1987 through 1992 he was employed as a marketing specialist for the recreation arm of Ft. Benjamin Harrison army post in Indianapolis. Tom was married to Catherine (Mills) Royer in 1979; she survives. Tom and Cathie met and lived in Indianapolis. He supported Cathie’s return to graduate school, and in 1994 they moved to Canton, MO, for her first full-time college position. There he worked for Upchurch and Associates helping develop video training manuals for small industrial firms. In 1997, Tom and Cathie moved to Adrian, MI, for her position as an art professor at Adrian College. He continued his creative pursuits, including cartooning, collage, and learning digital techniques, and often participated in Lenawee Council of the Visual Arts’ early exhibits. Of recent years, chronic illness increasingly limited his activities. A memorial service will be held at 10:30 a.m. Friday, May 17, in the Adrian College Chapel. Memorial gifts may be made to the Lenawee Humane Society, and condolences and memories may be shared at www.wagleyfuneralhomes.com.

Thomas Jay Royer passed away unexpectedly on Friday, March 15, 2019. Tom was born February 21, 1944, in Fort Wayne, IN, the only child of Neva (Bailey) Royer and Max J. Royer. He grew up in Indianapolis and spent much of each summer with his... View Obituary & Service Information

The family of Thomas J. Royer created this Life Tributes page to make it easy to share your memories.

Send flowers to the Royer family.