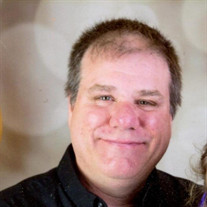 BLISSFIELD – Thomas Clark Haneline, age 52, of Blissfield, died unexpectedly on Tuesday, January 26, 2021, at ProMedica Toledo Hospital following a brief illness. He was born February 18, 1968, in Lapeer, MI, the son of Hubert D. and Margaret (Shepherd) Haneline. It was in Lapeer where Tom lived his early life, and graduated from Lapeer West High School with the Class of 1986. He furthered his education by earning a Bachelor’s Degree in Education to teach History from Eastern Michigan University. Tom was currently working for Ballreich Snack Food Company, prior to that he worked for the Frito Lay Company and Schwan’s. He also worked for the Toledo Blade and loved to have his children help him on his route. A very social person, Tom loved conversing with anyone he came in contact with and he never knew a stranger. He loved painting with his children and was an avid sports fan. He enjoyed following the Detroit teams as well as the University of Michigan teams, and watched every game on television if he couldn’t be there in person. He had a love for animals and adopted two rescue dogs. Tom attended Elem3nt Church in Blissfield. Surviving are his three children, Isaac Haneline, Phillip Haneline, and Eden Haneline; siblings, Jim Federick, Ken Federick, Vicky Zirnhelt, Maggie Scholl, Darrell Haneline, and Craig Haneline; the mother of his children, Sarah Haneline; and a large extended family. Preceding Tom in death were his parents; brother, Martin Federick; and sister, Janie Lewicki. Cremation will take place. A gathering of family and friends will be held on Monday, February 1, 2021 from 11:00 am to 1:00 pm at Wagley Funeral Home, Tagsold Chapel Blissfield. Following the Governor’s executive order, all attendees are required to wear a proper face covering, with the exception of those under the age of five years old or those who cannot medically tolerate. The family will hold a private memorial service. A live streaming of the service will be accessible beginning at 1:30 pm on Monday February 1, 2021 from Tom’s tribute wall on www.WagleyFuneralHomes.com, where a link to view the recording will be available for 90 days. In lieu of flowers, the family suggests that memorial contributions to honor Tom be made to the Lenawee Humane Society or St. Jude’s Hospital. Online memories and condolences may be shared at www.WagleyFuneralHomes.com.

The family of Thomas Clark Haneline created this Life Tributes page to make it easy to share your memories.

Send flowers to the Haneline family.