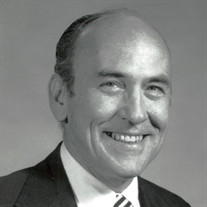 Bill Wood lived a brave, upright, honorable life and was an inspiration to others through his life and work. He died peacefully at home in Adrian, Michigan on Saturday, May 21, encircled in love by his wife Norma and their children and grandchildren. Wilson “Bill” Flann Wood was born in Oil City, Pennsylvania on November 20, 1927, to Lillian and Harry Barry Wood. Bill’s ambitious father moved his family throughout Western Pennsylvania as he hustled his way up the ladder from janitor to the President of the gas company for which he worked. Bill’s mother was a creative matriarch who raised her sons Harry, Bill, and Arleigh with a love for music, art, and literature. With dark hair and smiling eyes, Bill was a stunning, intelligent child who struggled with dyslexia but was a hard-working student who persevered in his studies. Perhaps it was his challenges with reading that propelled him to sharpen his math skills and develop an incredible memory and wit that astonished his family and friends throughout his life. Bill and his elder brother Harry were the best of friends. They served in World War II and were both stationed in Japan. Bill jumped out of airplanes as a paratrooper, a harbinger of his willingness to live life as an adventure. Harry was always looking out for Bill; in an accounting class at Thiel College, Harry met an amazing woman named Norma Mathay and intuitively knew that he needed to introduce her to his younger brother. With shiny black hair, sparkling eyes of her own, and an infectious laugh that was a perfect fit for Bill’s sense of humor, she and Bill married in 1948. Norma says that one of the things that drew her to Bill (in addition to his dashing good looks) was his tremendous kindness. Their daughter Patty was born in 1951; Bill managed to put chains onto the car during a massive snowstorm in the Alleghany Mountains as he drove to the hospital for his baby daughter’s birth. Bill was an incredible father; fun-loving and athletic, he taught Patty how to ride a bike and hang upside-down on the monkey bars. Eight years later, they welcomed their son Jeff into their family. Upon Norma’s encouragement, Bill applied to and was accepted into McCormick Theological Seminary in Chicago, Illinois where he studied to become a Presbyterian Minister. His proud family watched on as Bill was ordained in 1963 in Goshen, Indiana. This livelihood brought tremendous meaning to his life, and he led several churches (including the Adrian Presbyterian Church) throughout his 50-year career. He was committed to his work and his family and served both with determination and joy. Bill was upright and strong. For most of his life, he could be found in his office or sitting at the kitchen table listening to the stories of others. He was a collector of stories and used them in his sermons. He was a gifted orator who memorized elaborate pieces like “The Cremation of Sam McGee,” a fifteen minute period piece he recited from memory for the last time just weeks ago. He relished in creating relationships built on love and listening, and this practice resulted in a life rich in friendship and leadership. In addition to raising and loving their children, Bill served as an “American Dad” to several international exchange students who filled their lives with an appreciation of the richness of cultures from around the world and opened a lifetime of travel as they visited their “children.” He and his family also camped in almost all fifty U.S. states, visiting National parks and marveling at the beauty of the earth. Bill served as President of both the Adrian International Club and the Adrian Community Chorus where he and Norma sang together for many years. An inspirational grandfather, Bill was called “Boppy” by five grandchildren and eleven great-grandchildren. A favorite form of locomotion for his grandchildren was traveling on his shoulders or slung over his back as a “sack of potatoes.” Bill delighted in “trotting children to Boston” on his knees and magically extracting coins and other objects from behind people’s ears. Bill was cared for at home by Hospice of Lenawee, and the day before he died, he reached over and “got the nose” of one of his grown granddaughters. He smiled and laughed (and even tried to sing) until hours before his death. Bill’s wife Norma, daughter Patty and son-in-law Bob, and five grandchildren were all gathered around him at noon on Saturday, May 21. Norma and Bill’s lifelong love served as an inspiration to all who knew them, and Norma repeatedly expressed her appreciation and deep and abiding love to Bill as she stood with him at the head of the bed. Bill’s death was peaceful; he closed his eyes and his heart stopped beating as his family sang a tearful goodbye of “Amazing Grace.” Bill lived for 95 years and witnessed tremendous growth and change as a citizen and champion for social justice. He once said, “I came to recognize the humanity of people I were taught should be my enemies.” Perhaps because of this, he didn’t have an enemy in the world and was loved by countless souls. His incredible legacy will live on through all the lucky people he influenced and nurtured throughout his life. Per Rev. Wood’s request, cremation will take place. A memorial service for Rev. Wood will be held on Monday, May 23, 2022 at 2:00 p.m. at the Adrian First Presbyterian Church with Rev. Dr. Ann Marie Montgomery, Pastor Linda Farley, and Rev. Dr. Christopher Brundage, officiating. Wagley Funeral Home, Adrian has been entrusted with arrangements. In lieu of flowers the family suggests that memorial contributions to honor Rev. Wood be made to Hospice of Lenawee or the Adrian First Presbyterian Church. Online condolences and memories may be shared at www.WagleyFuneralHomes.com.

Bill Wood lived a brave, upright, honorable life and was an inspiration to others through his life and work. He died peacefully at home in Adrian, Michigan on Saturday, May 21, encircled in love by his wife Norma and their children and grandchildren. Wilson... View Obituary & Service Information

The family of The Reverend Wilson F. Wood created this Life Tributes page to make it easy to share your memories.

Bill Wood lived a brave, upright, honorable life and was an inspiration...

Send flowers to the Wood family.