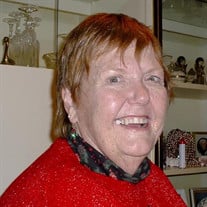 ADRIAN- Sue Anne Keagle was born in Battle Creek, MI on August 31, 1946. She passed away peacefully on September 19, 2018, at the Hospice of Lenawee Home in Adrian. She is survived by her partner of 27 years, Angie Schoonover; a sister, Marti (Richie Holman) Snyder of Zephyrhills, FL; brother, Mike (Kathy) Keagle of Elkhart, IN; three nephews, Brendon (Krystal) Keagle and Max (Haley) Keagle, both of Elkhart, IN and Riley (Taylor Bontrager) Keagle of Montgomery, AL; a great niece, Daisy Keagle and great nephew, Henrik Keagle, both of Elkhart, IN. Susie was proceded in death by her parents, Robert C. and Ruth A. (Sangrey) Keagle, both of Kalamazoo. Susie graduated from Portage High School in 1964. She was a proud graduate and lifelong fan of the Michigan State Spartans where she received her bachelor’s degree in 1969, in Communications. In 1984, she completed her master’s degree in Communications from Western Michigan University. Charity work was a passion that followed Susie from the beginning of her working career. She retired from the Adrian Training School after a long and blessed career from 1966 to 2003. Teaching communications at Jackson Community College from 1994 to 2013, allowed her to continue her gift of language and inspiration. She was the owner of Kaleidoscope Communications Consultants in Adrian. While having a fulfilling working career, Susie volunteered at several service organizations: Hope Center, Victim Services Unit of Lenawee and the Boys & Girls Club just to name a few. Susie had many friends and loved people. She knew almost everyone in town by sight and she never met a stranger. Her mother always told the story of how proud she was of Susie for pampering the girls at the Training School by buying dresses for them as they left the facility. She had a heart of gold. Her brother’s favorite memory of sister Sue was when she starred as the Cowardly Lion in the 1964 Portage High School production of the Wizard of Oz. She loved her two cats, Lola and Callie. Susie has touched the hearts and lives of those who were lucky enough to pass her way. She was adored and will be missed by many. Cremation has taken place and a memorial service will take place on Sunday, November 4, 2018, at 1:00 PM at the HOPE Community Center in Adrian. Memorial contributions may be made to Hospice of Lenawee, HOPE Center, Share the Warmth or the charity of the donor’s choice. Online condolences and memories may be shared at www.wagleyfuneralhomes.com.

ADRIAN- Sue Anne Keagle was born in Battle Creek, MI on August 31, 1946. She passed away peacefully on September 19, 2018, at the Hospice of Lenawee Home in Adrian. She is survived by her partner of 27 years, Angie Schoonover; a sister, Marti... View Obituary & Service Information

The family of Sue Anne Keagle created this Life Tributes page to make it easy to share your memories.

Send flowers to the Keagle family.