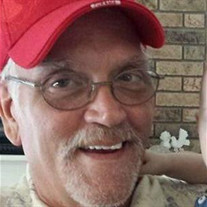 ADRIAN—Steven L. Stepp Sr., 61, of Adrian, passed away at home, on Friday, December 8, 2017. He was born September 30, 1956 to O. Ioan (Young) and Kenneth L. Stepp in Adrian, MI. Steve proudly served his country in the Air Force from 1975-79 during the Vietnam Era. Steve was self-employed working as a Master plumber at several businesses. He enjoyed everything involving outdoors and nature, such as fishing and camping, as long as his beloved 4 legged companion C.J. was along. He was an auto buff and aspired to be a photographer with a love of sunrises and sunsets surrounded by nature. He was a member of the VFW, AM Vets and DAV, where he was a part of the Commanders Club. Steve was a very loving man, taking care of his mother and father for many years, which allowed them to stay in their home rather than going into a nursing home. Surviving are his children, Steven Lee (Kim) Stepp, Jr. and Brian (Samantha) Stepp, all of Toledo and a sister Susan (Arlyn) Frauenkron of Houston, MN; five grandchildren and his lifelong friends of more than 45 years, Steve and Stan Doremus. In addition to his parents, Steven was preceded in death by a brother, Samuel Courtland Stepp and a sister, Nancy Schoensee. Memorial services for Steven will be Saturday, December 16, 2017 at noon at Wagley Funeral Home, Adrian with Rev. Larry Betz officiating. Visitation will be from 10 am until the time of the service. Full military rites will be conducted by the Annis-Flint Post #1584 and the American Legion Post #97 of Adrian. Online condolences and memories are welcomed at www.WagleyFuneralHome.com.

The family of Steven L Stepp, Sr. created this Life Tributes page to make it easy to share your memories.