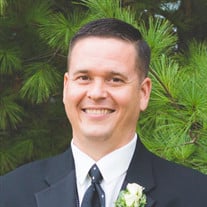 TECUMSEH- Steven G. McRobert, 40, of Tecumseh, died Sunday morning, August 16, 2020, at his home, following an extended battle with brain cancer. He was born November 7, 1979, in Adrian, the son of Linda (Phenicie) and the late Robert McRobert. Steven was a 1998 graduate of Onsted High School and was employed C & C Machine as a programmer. A lover of the outdoors, he loved the sports of shooting, hunting and fishing. He also enjoyed tending to his vegetable gardens. Steven began dating the love of his life, the former Nicole Spillman, in 2002. They were married in Clinton on October 14, 2017. She survives. Also surviving are his mother, Linda (Lowell) Oberhaus of Morenci; his siblings, Scott Knisel, Troy (Mary) Knisel, and Michelle (Joseph) McCarty; his beloved dog, Brody; and a large extended family. He was preceded in death his father, Robert McRobert; his Phenicie and McRobert grandparents. Visitation for Steven will be held at Wagley Funeral Home, Adrian on Friday, August 21, 2020 from 2:00-6:00 pm. Following the Governor’s executive order, all attendees are required to wear a proper face covering, with the exception of those under the age of five years old or those who cannot medically tolerate. Funeral services for Steven will be private. The family suggests that memorial contributions in honor of Steven be made to the Hope Lodge in Cleveland; a truly special place that helped to care for Steven and his family during his battle. Online memories and condolences may be shared at www.WagleyFuneralHomes.com

The family of Steven G. McRobert created this Life Tributes page to make it easy to share your memories.

Send flowers to the McRobert family.