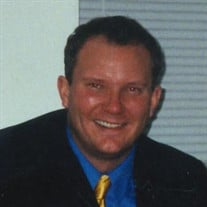 TECUMSEH – Stephen R. Meredith, 50, of Tecumseh, departed this life on Friday, April 2, 2021, from his home surrounded by his loving family while under the care of Hospice of Lenawee. He was born July 5, 1970, at Bixby Hospital in Adrian, to Mark Stephen and Sharon Kay (Bailey) Meredith. Steve lived his formative years in Tecumseh where he attended school. Built for basketball, he was a talented center on Tecumseh High School team. A good student, he was a proud recipient of the Tilton Award. After graduating from Tecumseh in 1988, he furthered his education at Eastern Michigan University, where he obtained a Bachelor’s Degree in Business and Marketing. Steve lived the majority of his adulthood in the Detroit area where he made numerous friends. Skilled at computers and networking, Steve worked in IT, most recently for Cap-Gemini Consulting and Compuware. Catholic by faith, Steve received his Sacraments at Sacred Heart Catholic Church in Hudson, and most recently was a parishioner at the National Shrine of the Little Flower Basilica in Royal Oak, where he served as a Lector. He was a sports fanatic, and rooted for Michigan State University teams, specifically Spartan basketball. He also enjoyed golfing, and will be remembered for his outgoing personality and his joyous smile. The past two years Steve faced many health challenges, and his family was blessed to welcome him home to their care. The family schnauzer, Lexi, became his special companion in his final time on earth. In addition to his parents Steve and Sharon Meredith of Tecumseh, he is survived by his brother Scott (Ameena) Meredith of Grand Blanc, MI; nieces and nephews, Nicole of Oakland, FL, and Marcella, Annie, Erik, and Philip of Grand Blanc; and numerous aunts, uncles, and cousins. Steve was preceded in death by his grandparents, Mark and Erma Meredith, Annie Bice, and Woody Bailey. Visitation will be held on Wednesday, April 7, 2021, from 3-5 p.m. at the Wagley Funeral Home in Adrian. A Scripture Service will follow at 5:00 p.m. with Deacon Ron Kenney officiating. The family suggests that memorial contributions to honor Steve be made to Hospice of Lenawee or the Lenawee Humane Society. Online memories and condolences may be shared at www.WagleyFuneralHomes.com.

TECUMSEH &#8211; Stephen R. Meredith, 50, of Tecumseh, departed this life on Friday, April 2, 2021, from his home surrounded by his loving family while under the care of Hospice of Lenawee. He was born July 5, 1970, at Bixby Hospital in Adrian,... View Obituary & Service Information

The family of Stephen R. Meredith created this Life Tributes page to make it easy to share your memories.

Send flowers to the Meredith family.