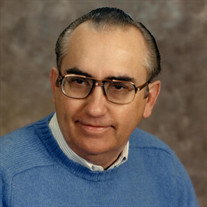 BLISSFIELD – Stanley Warren Karl, 88, of Blissfield died Sunday evening October 24, 2021 at Lenawee Medical Care Facility in Adrian. Stan was born at home on January 6, 1933, in Ottawa Lake, MI, the first son of Martin Sr. and Myrtle (Seegert) Karl. Stan graduated from Blissfield High School in 1951. He proudly served his country in the United States Army deploying overseas during the Korean Conflict. After his return, he married Hazel Carrico on June 30th, 1956 at Trinity Lutheran Church, Riga, MI. He worked at Consumers Power as a field design engineer for 36 years before retiring. His meticulous work ethic was known to all who knew him in the community. Whether it be in his home, his lawn, his cars & hot rods, while woodworking, or constructing his model cars & airplanes - nothing short of doing the job expertly would suffice. Stan is survived by his wife Hazel, of 65 years, and will be remembered as a loving husband. A proud father, his memory will be cherished by his children, Brenda Woolard of Monroe, MI and Terry (Lynne) Karl of Adrian, MI. He was the loving grandfather of four grandchildren, Stephanie (Anthony) Tenorio, LeeAnn (Ryan) Woody, Brendan (Nadine) Karl & Schuyler (Christin) Karl; and eight great-grandchildren, Annalise and Alexandria Woody, Katharina, Philip and (and soon to arrive) Baby Boy Karl, and Adelaide, Alaric, and Theodora Karl. He will be deeply missed by his family. He was preceded in death by his parents and all five of his siblings; Marlo (Karl) Seeburger; Wilbur Karl; Nelda Karl; Martin Karl Jr., and Merle Karl. A friends and family gathering will take place on Thursday, October 28, 2021 from 5:00 p.m. - 7:00 p.m. at Wagley Funeral Home, Tagsold Chapel, Blissfield, MI. A Celebration of Life will be held on Friday, October 29, 2021 at 11:00 a.m. at the funeral home with Fr. David Hudgins officiating. A live streaming of the service will be accessible from Stan’s tribute wall on www.WagleyFuneralHomes.com. Visitation will also be held on Friday beginning at 10 a.m., until the time of the service. Burial to immediately follow at Pleasant View Cemetery, Blissfield, MI. Full military honors will be provided by the Blissfield American Legion Post #325. Memorial contributions are suggested to Disabled American Veterans or Lenawee Humane Society. The family would like to extend a special thank you to the nurses and staff at Lenawee Medical Care Facility for their wonderful care during Stan’s final days. Online condolences and memories may be shared at www.WagleyFuneralHomes.com.

The family of Stanley Warren Karl created this Life Tributes page to make it easy to share your memories.

Send flowers to the Karl family.