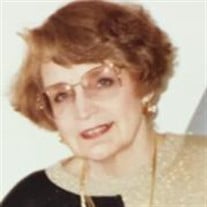 Manitou Beach – Sondra Sue Walker, age 85, formerly of Adrian, passed away on Monday, February 1, 2021, at Swanton Valley Healthcare Center with the support of Hospice of Northwest Ohio. Born on June 26, 1935, to Raynor and Donetta (Beebe) Snyder in Adrian Michigan. Sondra graduated from Adrian High School in 1953. On May 31, 1963, Sondra married Robert B. Walker and they celebrated 49 years before his passing in 2013. After retiring, Sondra and Robert lived in Bradenton, FL. for twenty years and embraced the warmer weather they were able to enjoy year-round. Sondra worked in retail, specializing in clothing and jewelry. She attended Christ United Methodist Church in Bradenton, FL. and more recently, Adrian United Methodist Church. Sondra enjoyed singing in the church choir, knitting, and spending time with her family, especially her grandchildren and great-grandchildren. She is survived by her daughters, Sue (Phil) Cargnino and Holly Walker-Vendetto, both of Manitou Beach; grandchildren, Zach Cargnino, Drake (Bridget) Cargnino, Kirby (Shine) Walker and Brooke Vendetto; great-grandchildren, Caeden, Caeley, Elisabeth, Elijah and Samuel; special nieces, Denee Hartung and Sandi Humphries and numerous beloved nieces and nephews. Sondra was preceded in death by her husband, Robert; sons, Joseph Walker and Edward Bolz; and sister, Shar Ann Hartung. Sondra will be missed by her family greatly. Following Sondra’s wishes, cremation will take place and a Celebration of Life will be held at a later date. Memorial contributions may be made to Adrian United Methodist Church or Hospice of Northwest Ohio. All arrangements have been entrusted to Wagley Funeral Home, Adrian, where online memories and condolences may be shared at www.WagleyFuneralHomes.com

The family of Sondra Sue Walker created this Life Tributes page to make it easy to share your memories.

Send flowers to the Walker family.