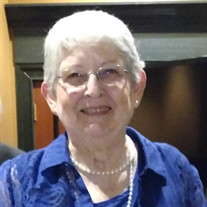 ADRIAN— Shirley (Yoakum) Bacus, 80, of Adrian passed away Tuesday, April 21, 2020 at her home. Born February 27, 1940 in Missouri to Jesse and Carrie Yoakum. Shirley moved to Michigan when she was about 7 yrs. old, where she lived most of her life except a brief time in Indiana. She graduated from Adrian High School in 1958. Shirley married Carl Leon Bacus on March 1, 1958. They were married fifty-eight years. Leon passed away March of 2016. To this union four children were born. Allen (Tereasa), Richard (Connie), Susan Bacus-Dillon, and Carren (Jim) Powell, one foster daughter Faustina (Nicolas) Cerda. Shirley enjoyed the love of 16 grandchildren, 16 great-grandchildren. Shirley is survived by one brother, Thomas. She was preceded in death by her parents, Jesse and Carrie Yoakum, four brothers, John, Jesse, Robert and Claude Yoakum, and her beloved husband, Leon Bacus. She cherished the love of her cousins, nieces, nephews, many friends especially those from the Adrian Church of Christ where she was a member all her life. When Shirley wasn’t attending to the needs of her large family, she also worked as a bus driver for Madison Schools, Adrian, MI and JCPenney working several different positions. Shirley’s hobbies included sewing, quilting, crocheting, stitching, teaching her many grandchildren and great grandchildren those skills, cooking, Ladies’ Bible classes with the church, making “Love” bears for area hospitals (Gladwin). Most recently she enjoyed singing with the Tecumseh Pops Community Chorus and traveling. Her children will miss their beloved mother. She will be greatly missed by all those who know her but especially her family. Due to the current Covid-19 conditions, there will not be a memorial service. A celebration of Shirley’s life will be held at a future date. In lieu of flowers, memorial contributions may be made to the Shults Lewis Children and Family Services, P.O. Box 471, Valparaiso, IN 46383 or the American Cancer Society. Arrangements have been entrusted to Wagley Funeral Home, where online memories and condolences may be shared at www.WagleyFuneralHomes.com.

ADRIAN&#8212; Shirley (Yoakum) Bacus, 80, of Adrian passed away Tuesday, April 21, 2020 at her home. Born February 27, 1940 in Missouri to Jesse and Carrie Yoakum. Shirley moved to Michigan when she was about 7 yrs. old, where she lived most... View Obituary & Service Information

The family of Shirley B. (Yoakum) Bacus created this Life Tributes page to make it easy to share your memories.