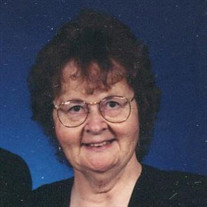 ADRIAN – At 4:50 a.m., October 26, 2016, Shirley J. Myers, age 79 left this earth to the awaiting arms of her Lord and Savior. She was born February 4, 1937, in Adrian, Michigan, the only daughter of Allen and Alice (Dicks) Griffin. She attended the Free Soil single room school, now museum at Heritage Park, and graduated with the Class of 1954 from Adrian High School. While earning a Bachelor of Arts degree from Siena Heights, she spent two summers at University of Durango in Mexico where she lived with the same family and learned the language and culture. On October 28, 1955, Shirley married Merlin Myers and they were blessed with 60 years and 363 days together, along with two children, Kirk and Denise. Shirley and Merlin opened their home to eight foster children. Although Shirley taught Spanish for a short time and was a substitute teacher as well, her true gift was bookkeeping. She worked as a bookkeeper for several businesses before serving as the Deputy Treasurer for Lenawee County, and later as the Treasurer for Madison Township. Shirley was a faithful member of St. John’s Lutheran Church. Shirley’s greatest loves were God, her family, a favorite horse, Scrapper, her faithful dog, Keno, and the Detroit Tigers and Lions. She spent many hours reading about her much-loved Lord and Savior, who she was patiently waiting to free her from 20 years of cancer and related illnesses. In addition to her husband, Merlin, she is survived by her treasured granddaughters, Tara Salazar and Tana Bailey; many loved nieces and nephews and many large great grand dogs. In addition to her parents, she was preceded in death by her children, Denise Bailey and Kirk Myers; and brothers, Lee and Richard Griffin; and brother-in-law, Harold Myers. At Shirley’s request, cremation will take place. Memorial services will be held at 3:00 p.m., Sunday, October 30, 2016 at St. John’s Lutheran Church with Rev. Joel Sarrault officiating. Visitation will be at Wagley Funeral Home, Adrian, Saturday from 4 to 7 p.m. Contributions in memory of Shirley are suggested to St. John’s Lutheran Church. Online condolences and memories may be shared at www.WagleyFuneralHome.com.

The family of Shirley J. Myers created this Life Tributes page to make it easy to share your memories.

Send flowers to the Myers family.