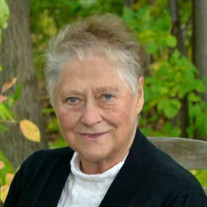 ADRIAN — Sharon Ruth Ulrich (77) was brought into this world on December 4, 1942 in Toledo Ohio by Dolly Cleo (Tefft) and Francis Hiram Davenport. Sharon married Robert George Ulrich on April 3, 1965 in Toledo they had 3 wonderful children Kimberly Phipps-Davis, Adrian MI, Robert Michael Ulrich (Dana), Vail AZ and Mark Ulrich (Justin), Bismarck ND. She left this world unexpectedly, at Promedica Toledo Hospital, to join her heavenly Father on July 15, 2020. She was preceded in death by her parents, 2 sisters Sandra Semmler and Frances Davenport, brother Dale “Bill” Davenport and son in law Roger Davis. Sharon is also survived by her sisters Dessie “Jean” Harris of Adrian, MI and Lois Stockdale of Eugene, OR., her 3 children, her grandchildren: Jeffrey Phipps (Markie), Eric Phipps (Jenny), Courtney Ulrich, Patricia Ulrich, Bryanna Hoffmann, Ehren Phipps and Sean Ulrich as well as 7 great grandchildren. She was truly touched by God. At the age of 9 she displayed an ability to play piano and organ without ever being able to read a single note. Any song she heard she was able to play instantly. Throughout her life she inspired thousands of souls through her music ministry. She touched everyone she came in contact with due to her infectious love of music. Her ability to hear and teach intricate harmonies of gospel quartets and choirs raised hundreds of groups to outstanding levels of achievement with her leadership and direction. She sought to glorify God in all that she did and cherished bringing the lost to Christ. She loved numbers and worked for the state of Michigan, in a variety of positions that included bookwork and balancing budgets for 30 years until she retired in 2012. She continued to serve the community by volunteering with The Salvation Army and The Department of Aging. She always found a way to give to those in need and never said “no” when asked to help. She had a passion for crocheting and made her children and grandchildren many gifts including blankets that will warm their hearts forever. She loved her family unconditionally until the moment she met Jesus face to face and now she looks upon us all from the right hand of God smiling saying “all is well with my soul”. Funeral services will take place at 11 a.m., Wednesday, July 22, 2020, at Wagley Funeral Home with Pastor Olivia Nickelson officiating. Burial will be private. Visitation will be held at the funeral home Tuesday from 2 to 8 p.m. Following the Governor’s executive order, all attendees are required to wear a proper face covering, with the exception of those under the age of five years old or those who cannot medically tolerate. For those unable be present, a live streaming of the service will be accessible from Sharon’s tribute wall on www.WagleyFuneralHome.com, where a link to view the recording will be available for 90 days. Donations in her memory can be made to The Salvation Army of Adrian. Online memories and condolences may be shared at www.WagleyFuneralHomes.com

The family of Sharon R. Ulrich created this Life Tributes page to make it easy to share your memories.

ADRIAN — Sharon Ruth Ulrich (77) was brought into this world...

Send flowers to the Ulrich family.