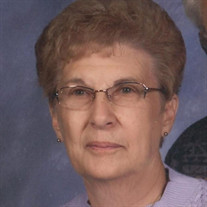 BLISSFIELD – Sharon L. Cambal spent 83 precious years here with us before she died peacefully at home and went to join her husband, Edward, in Heaven on January 18, 2022. She had been under the care of Promedica Hospice and her loving family. Sharon was born March 21, 1938, to Herbert and Anna (Koaster) Frasier. She was a graduate of Owosso High School. On April 26, 1958 Sharon married the love of her life, Edward Cambal. Sharon and Edward were happily married for 58 years before his death in 2016. They initially met through Polka dancing and they kept dancing throughout their many blessed years together. While Ed was busy farming, Sharon was also busy as the high school secretary for Blissfield Community Schools for many years. She was loved and respected by the faculty and students during her years of dedicated service and even after she retired, Sharon remained a favorite. Sharon enjoyed being outdoors tending to her garden and flowers. She treasured her time with family, whether it was attending her grandkids sporting events or baking a Czechoslovakia pastry with them. Sharon was a parishioner at Light of Christ Parish, St. Peter the Apostle Catholic Church. Sharon is survived by her children: Steven (Tina) Cambal, Brenda Zimmanck, and Ronald Cambal; ten grandchildren, Stephanie Vansteenkiste (Randy Gallup), Jennifer Bradley(Trey Price), Edward (Maegan) Zimmanck, twins: Taylor Cambal (Nick Corbissero) and Erin (Zack) Schultz, Tiffany (Tyler) Sutton, Kelsey (Brandon) Ledbetter, David (Elizabeth) Hueter, Michael (Jennifer) Tiede and Eric Tiede. Sharon’s pride and joy were her 13 great-grandchildren: Max, Dylan, Sam, Landon, Harper, Paisley, Zoey, Tommy, Marc, Max, Henry, Layla, and Walker with another great-grandson to arrive soon; sister, Dorothy Saulnier; and brothers-in-law, Jim Williams and Fred Toma. In addition to her parents and husband, she was preceded in death by three sisters, Betty Williams, Lorraine Sedlar, and Ruthann Toma; and a daughter-in-law, Barb Cambal. The Mass of Resurrection for the soul of Sharon Cambal will be celebrated by Father Jeff Poll on Friday, January 21, 2022, at 11:00 a.m., at Light of Christ Parish, St. Peter the Apostle Catholic Church. Rite of Committal will follow in Riga Cemetery. The family will receive friends for visitation also on Friday at the church, from 10:00 a.m. until Mass begins. Arrangements have been entrusted to the care of Wagley Funeral Home, Tagsold Chapel in Blissfield. Online condolences and memories may be shared at www.WagleyFuneralHomes.com

BLISSFIELD &#8211; Sharon L. Cambal spent 83 precious years here with us before she died peacefully at home and went to join her husband, Edward, in Heaven on January 18, 2022. She had been under the care of Promedica Hospice and her loving... View Obituary & Service Information

The family of Sharon L. Cambal created this Life Tributes page to make it easy to share your memories.

Send flowers to the Cambal family.