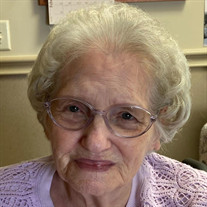 Sarah Frances (Howell) Yoakum, age 86, passed away May 16, 2022, at Lenawee Medical Care Facility. Sarah was born April 22, 1936 in Hamilton, Alabama, to Clyde and Mae Howell. Frankie, as Sarah was called as a child, spent her childhood in various places in Marion County, Alabama. She had farm chores and picked cotton as a child. Her early life was hard, by today’s standards, but filled with adventures, laughter, and love. She and her family moved to Adrian, Michigan, when Sarah was a young teenager. She met and married the love of her life, Jesse Yoakum, March 28, 1953, just before she turned 17 years old. They were married nearly 47 years. Jesse passed away in 2000. Sarah was known by several names. Her family, brothers, sisters, nieces, and nephews called her Frankie. Others who knew her well called her Frances. Professionals (doctors and such) knew her as Sarah. Her grandchildren and great grandchildren called her Grandma Sarah. She answered to all three! Frances spent most of her adult life as a stay-at-home wife and mother, working a short time in the early 90s as a manager at Maumee Jewelry. Once her children were raised, she earned her diploma and graduated from Adrian High School. Through the years, Frances took care of children in her home, and showed hospitality to many by preparing meals and keeping overnight guests. She was a faithful and active member of the Adrian Church of Christ for more than 60 years. She taught children’s and teen classes and served beside her husband as an elder’s wife for many years. She was also a strong supporter of Rochester University and Shults Lewis Child and Family Services. Sarah loved to read, quilt, and in her later years, watch Matlock, Little House on the Prairie, and The Waltons on TV. Sarah is survived by her four children, Lynne (Larry) Stewart, Larry Yoakum, Dale Yoakum, and Anne Leonard, her five grandchildren, Beth (Brian) Bowers, Kevin (Sara) Stewart, Austin (Christina) Yoakum, Christopher Leonard, and Andrew Leonard, and her five great-grandchildren, Sophie and Sawyer Bowers, Jesse Yoakum, and Jesse and Lily Stewart. In addition, she is survived by her two brothers, Bill (Beverley) Howell and Jim (Vonna) Howell and nineteen nieces and nephews. Preceding her in death were her parents, her husband Jesse, and her sister Betty Janowski. Funeral services will be held Thursday, May 26, 2022 at 2:30 p.m. at Wagley Funeral Home, 1501 West Maumee Street, Adrian. Visitation will take place prior to the funeral from 12:30 to 2:30 p.m. In lieu of flowers, memorial gifts may be made to Rochester University at rochesteru.edu/donate or to Shults Lewis Child and Family Services at shultslewis.org/donate.

Sarah Frances (Howell) Yoakum, age 86, passed away May 16, 2022, at Lenawee Medical Care Facility. Sarah was born April 22, 1936 in Hamilton, Alabama, to Clyde and Mae Howell. Frankie, as Sarah was called as a child, spent her childhood in... View Obituary & Service Information

The family of Sarah Frances Yoakum created this Life Tributes page to make it easy to share your memories.

Send flowers to the Yoakum family.