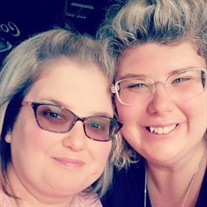 BLISSFIELD – Sarah Smith, age 38, of Blissfield, died Friday evening, March 11, 2022, surrounded by her family while under the care of Hospice of Lenawee. She was born June 2, 1983, in Toledo, OH, the older daughter of Allen and Judith (Mattek) Smith. A lifelong resident of Blissfield, Sarah graduated from Blissfield High School with the Class of 2001, and later studied Law at the ITT Technical Institute in Maumee, OH. Raised with a strong work ethic, Sarah always had gainful employment, working over 13 years at Blissfield McDonalds, and four years with the Blissfield Insurance Agency. Just over a year ago, her entrepreneurial drive allowed her to realize her dream of opening her own business in downtown Blissfield, Her Daughters’ Boutique, with the help of her sister. She also worked as an independent saleswoman for both Tastefully Simple and Color Street. Family was the center of Sarah’s life, and after losing her mother in 2008, she willfully assumed many roles of the matriarch, in particular always making sure her dad’s needs were taken care of. Remembered for her selfless ways, her love and care for others were unconditional, and she had special bonds with both her father and her sister. She always anticipated get-togethers with her sister when they could watch sitcom re-runs of “Friends”, “The Golden Girls”, “Roseann”, “King of Queens”, “Reba”,and “Everybody Loves Raymond”, to name a few. A lover of country music, Sarah had a special affinity for the artist Luke Bryan. She also enjoyed traveling with the family—be it it camping, trips out west, or yearly visits to Kissimmee, FL. One of her favorite peaceful places to be, however, was at the pond at her Aunt Sue’s property in Riga. Sarah was very involved with the Heritage Farmers Tractor Club, and at one time served as its secretary. She also was a devoted member of St. John’s Lutheran Evangelical Church in Riga. Surviving to cherish her memory are her father, Allen Smith of Blissfield; her boyfriend of 5 years, Jerome Brown of Riga; her sister, Jessica Smith (Jose Nepomuceno) of Blissfield; her paternal grandmother, Pauline Smith of Ottawa Lake; aunts and uncles, John (Leann) Mattek of Riga, Mark (Jamie) Mattek of Riga, Sue (Jim) Walters of Riga, and Amy Ambil of Toledo; cousins, Renee, Stephen, Johnathon, Josh, and Jason Mattek; and her beloved dachshund companion, Smitty. Sarah was preceded in death by her mother, Judith; maternal grandparents, Floyd and Marclella Mattek; paternal grandfather, Richard Smith; and an uncle, Willie Ambil. The family will receive friends for visitation on Tuesday, March, 15, 2022, from 3:00 – 7:00 p.m. at Wagley Funeral Home, Tagsold Chapel in Blissfield. A funeral service for Sarah will be held at St. John’s Evangelical Lutheran Church in Riga on Wednesday, March 16, at 11:00 a.m. with Rev. Justin Shrum officiating. Burial will follow in Riga Cemetery. Those planning an expression of sympathy may consider memorial donations in honor of Sarah be made to Hospice of Lenawee, Lenawee Community Mental Health Authority, or an alternate charity of their choice. Online condolences and memories may be shared at www.WagleyFuneralHomes.com.

BLISSFIELD &#8211; Sarah Smith, age 38, of Blissfield, died Friday evening, March 11, 2022, surrounded by her family while under the care of Hospice of Lenawee. She was born June 2, 1983, in Toledo, OH, the older daughter of Allen and Judith... View Obituary & Service Information

The family of Sarah Marie Smith created this Life Tributes page to make it easy to share your memories.