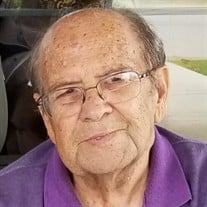 ADRIAN- Samuel Ruble Rye, age 76, died peacefully surrounded by family, on September 13, 2020 at St. Joseph Mercy Hospital in Ann Arbor. Born on May 30, 1944 to Ruby (Gilmore) and Samuel A. Rye in Hamilton, Alabama. Sam, also known as Ruble by many, is survived by his wife of 54 years, Patricia A. Rye (Snyder) and children Scott Rye of Spring Lake, MI and Krista McFarland of Grand Rapids, MI, brother Harold Rye (Nell) of Maybee, MI, sister Judy Ward (Roscoe) of Adrian, MI, brother-in-law Jim Snyder (Sue) of Adrian and many beloved aunts, uncles, cousins, nieces, and nephews. Sam was proceeded in death by his parents Ruby and Samuel Rye, in-laws Eunice and Richard Snyder, and his son-in-law, Dan McFarland. Sam moved with his family from Alabama to Michigan at the age of 8 when his dad and uncles relocated during the automotive boom of the 1950’s. He graduated from Adrian High School in 1962 and then attended Adrian College. He married his high school sweetheart, Pat, in 1966 at the First Presbyterian Church where he was a proud member and served as a deacon and on the church session for many years. He worked his entire career at Walter Frazier and Associates Land Surveyors, becoming owner until his retirement in 2010. A public servant at heart, he served the City of Adrian as a Commissioner beginning in 1989 and becoming the longest serving mayor being re-elected for five consecutive terms from 1995 through 2005. He was active in the Adrian Jaycees and the Adrian Rotary where he formed many lifelong friendships. He also served on many local and state nonprofit boards, and most recently the Lenawee County Historical Society. Sam had a great sense of humor and appreciated the lighter side of life; he was always up for sharing a funny story, a good laugh, or playing a practical joke. He appreciated his southern roots, western movies, the history channel, his dog Sami, and most importantly time spent sharing a meal with good friends or family. He and Pat enjoyed traveling and were blessed to go on many trips around the states and internationally, including family reunions and annual stays in Gulf Shores, Alabama. Funeral services for Sam will take place on Friday, September 18, 2020, at 4 p.m. at Wagley Funeral Home, Adrian with Rev. Ann Marie Montgomery. Visitation will be from 2 p.m. until the time of the service. Following the Governor’s executive order, all attendees are required to wear a proper face covering, with the exception of those under the age of five years old or those who cannot medically tolerate. For those unable to be present, a live streaming of the service will be accessible from Sam’s tribute wall on www.WagleyFuneralHome.com, where a link to view the recording will be available for 90 days. In lieu of flowers, the family encourages donations to the Lenawee County Historical Society, the First Presbyterian Church of Adrian Memorial Fund, American Heart Association, National Kidney Foundation, or an organization of your choice. Memories and online condolences may be shared at www.wagleyfuneralhomes.com.

The family of Samuel Ruble Rye created this Life Tributes page to make it easy to share your memories.

Send flowers to the Rye family.