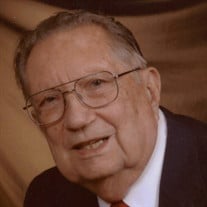 ADRIAN- Samuel “Harold” Gregg, age 89, of Adrian passed away on Wednesday, June 12, 2019, at home. He was born on September 4, 1929, in Sand Creek, Michigan, to Samuel D. and Gwendolen L. (Duerr) Gregg. Harold graduated from Adrian High School with the Class of 1950. On New Year’s Day in 1951, in Clinton, Michigan, Harold married Evelyn Myrle Heimerdinger and they shared 67 years together before her death in 2018. Harold went on to serve in the United States Army from 1951 to 1953, during the Korean War. Returning to Michigan, Harold worked for Kewaunee for 38 years and then went on to Kapnick Insurance where he was a utility worker for 10 years. Cars were a big part of Harold’s life as he was a member of the Irish Hills Antique Auto Club; he restored his parents 1968 Oldsmobile and he was especially proud of his 1941 Buick that he also restored that won him many awards. His talents for building allowed him to construct his own home. He enjoyed spending time with his brother Lavon and working on his hobbies of antique cars, model trains and riding motorcycles. A talented artist, Harold designed the logo for the Irish Hills Antique Auto Club. Christ Episcopal Church was an important part of Harold’s life as he was a member since 1947, sang in the choir and was part of the vestry. He was also a member of the American Legion Post #275. As busy as Harold was, his family meant everything to him and he cherished the times they spent together. He is survived by his children, Harold (Deb) Gregg and Darlene (Leonard) Hooker, both of Adrian; grandchildren, Luke (Rachael) Gregg and Lisa (Vincent) Williams; and great-grandchildren, Tyler, Leah, Emma, Vincent Jr., and Jamari. Harold was preceded in death by his parents; wife, Evelyn and brother, Lavon Gregg Funeral services will take place at 1 p.m., Monday, June 17, 2019, at Wagley Funeral Home with Rev. Stephen Boley officiating. Visitation will be held at the funeral home from 10 a.m. to time of service. Military honors will be conducted by the Annis-Fint Post #1584 and American Legion Post #97. Burial will take place at Lenawee Hills Memorial Park at a later date. Contributions in memory of Harold are suggested to the American Legion. Online condolences and memories may be shared at www.WagleyFuneralHomes.com.

The family of Samuel Harold Gregg created this Life Tributes page to make it easy to share your memories.

Send flowers to the Gregg family.