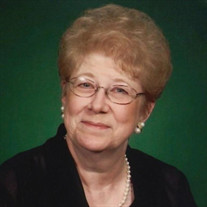 TIPTON – Sally Jane Rieve, age 77, of Tipton, died in the evening on Sunday, May 9, 2021 at home with her husband, Russ, and family by her side. Sally was born on August 27, 1943 to Jerome G. and Georganna H. (Greiman) Uyttenhove in York, Pennsylvania. After graduating from Onsted high school in 1961, Sally worked in the insurance field. On June 21, 1963 Sally married the love of her life, Russell L. Rieve and they have been blessed with 57 years together. Family was the center of Sally’s life and she enjoyed raising their three daughters and spending time with the grandchildren. She was a member of Grace Point Evangelical Free Church and helped wherever she was needed whether it was teaching Sunday school or working in the kitchen. Sally and Russ shared their faith with others through song and prayer. Russ provided the song and Sally was the voice behind the screen bringing the puppet “Hooey” to life. When her daughters were young, Sally volunteered her time with the Rainbow Club and was a 4-H leader and community leader for 25 years. After her family was raised, Sally gave of her time and talents working as a developmental kindergarten aide, once again touching the lives of many young children. In addition to her husband, Russ, Sally is survived by their daughters, Krista and Hank Scott, and their children, Amanda (Joseph) and Nick (Samantha); Kimberly and Tracey Roberts, and their children, Trevor (Chelsi) and Tiffany (Joshua); and Katina and Brent Woerner, and their children, Dylan (Val) and Grace (Austin); brother, Jerome “Jerry” and Sharon Uyttenhove and sister-in-law, Deborah Couts. She was preceded in death by her parents, brother, Donald Uyttenhove; sister, Mary Ann Fick; brother-in-law, Dale Couts and in-laws, Carl and Juanita Rieve. Funeral services for Sally will be held on Thursday, May 13, 2021, at 11 a.m. at Grace Point Evangelical Free Church, Adrian with Minister Doug Whittlef officiating. Burial will follow at Lenawee Hills Memorial Gardens, Tecumseh. Visitation will take place on Wednesday, May 12, 2021, from 3 to 7 p.m. at Wagley Funeral Home, Adrian; and one hour prior to the funeral service at the church. Following the Governor’s executive order, all attendees are required to wear a proper face covering, with the exception of those under the age of five years old or those who cannot medically tolerate. Memorial contributions may be made to Hospice of Lenawee. Online memories and condolences may be shared at www.WagleyFuneralHomes.com.

The family of Sally Jane Rieve created this Life Tributes page to make it easy to share your memories.

Send flowers to the Rieve family.