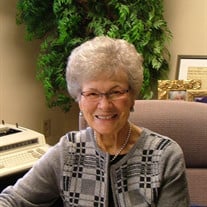 ADRIAN – Our earthly loss is truly heaven’s gain. Ruth Alvera Merillat, co-founder of Merillat Industries, whose servant’s heart has forever benefited Lenawee County, passed in to the arms of God on August 19, 2020, from the home of her son in East Jordan. She was 99 1/2. Born on January 18, 1921, in rural Pettisville, OH, she was one of four daughters born to the late Wilber and Edna (Leupp) Meller. In addition to her parents, she was preceded in death by her husband, Orville Merillat, and two sisters, Evelyn Warner and Virginia Vinson. Her legacy carries on in those left to cherish her memory, including her only son, Richard (Lynette Jacobs) Merillat; three granddaughters, Wendy R. (Craig) Lyon of Naples, FL, Collette C. Merillat of Northville, MI, and Tricia (David) McGuire of Ann Arbor, MI; great-grandchildren, Greyson Otwell, Madelyn, Jocelyn, and Nicholas Lyon, and Vaughn, StellaRose, and Evelyn Violet McGuire; and a sister, Marie (Robert) Everingham of Spring, TX. Mrs. Merillat’s humble roots began in Fulton County, OH, where she worked on her father’s farm and graduated from Wauseon High School in 1939. She then attended beauty school. While in high school, she was introduced to her future husband, Orville Merillat, whom she married a day after her 20th birthday in 1941. Shortly after, Orville’s enlistment in the Coast Guard sent him overseas during World War II; Ruth moved to Adrian, MI to join her mother in supporting the war effort by working in a factory for the 18 months of Orville’s deployment. Supporting her husband’s entrepreneurial dream of beginning a cabinet shop, Ruth made many sacrifices and saved all the money she could during their early marriage to do so. In 1946, their dream became a reality with the construction of a modest 2,400 square foot building in Adrian. Ruth was instrumental in the day-to-day bookkeeping of their new business. Under her and Orville’s leadership, Merillat Industries grew to be the largest kitchen and bathroom cabinet manufacturer in the United States, a company with 11 plants in seven states and nationwide distribution. Ruth and Orville sold the business in 1985 to Masco Corporation; a decision not easily made, but a decision that blessed and benefited countless organizations and lives locally—and around the world—from the Merillat’s philanthropic spirit. Perhaps their greatest contribution to the local community and another dream realized was their investment in founding Lenawee Christian School and the Christian Family Centre. Ruth’s personal faith journey inspired her drive to foster Christian upbringings and advance the Word of God everywhere she could. Mr. and Mrs. Merillat were longtime members of Trenton Hills United Brethren Church in Adrian. They lived by Malachi 3:10, giving a portion of everything they made to the Lords’ work. They were proud benefactors of Focus on The Family in Colorado Springs, CO, Coral Ridge Ministries of Ft. Lauderdale, FL, Bixby Medical Center, Adrian College, Siena Heights University, Camp Michindoh, Huntington College, and many other organizations that shared their values. She was the recipient of numerous local, state, and national honors, including the Athena Award, The Salvation Army Citizen of the Year Award and the Maple Leaf Award which was given to both Ruth and Orville for their contributions to the community. She has also been recognized by Michigan Family Forum, International Society of Christian Endeavor, Lenawee Chamber of Commerce, Moody Bible Institute and Focus on the Family. Later in life she enjoyed winters in Naples, FL at the home of her son, Richard and daughter-in-law, Lynette. The family will receive friends while practicing responsible social distancing on Monday, August 24, 2020, from 3-8 p.m. at the Christian Family Centre (1800 US Hwy 223, Adrian). Due to COVID 19 restrictions, Ruth’s funeral will be private. Live streaming of her service will begin at 2:00 p.m., Tuesday, August 25, 2020, via Facebook Live from the Lenawee Christian School Facebook Page. Ruth will be laid to rest beside her beloved husband in Oakwood Cemetery in Adrian. Wagley Funeral Home in Adrian is entrusted with the arrangements. In lieu of flowers, please donate to the Ruth Merillat Memorial Scholarship Fund at Lenawee Christian School. Donations can be made online at www.lenawee.org/gift or via mail to LCS Advancement, 111 Wolf Creek Hwy, Adrian, MI 49221. Following the Governor’s executive order, all attendees are required to wear a proper face covering, with the exception of those under the age of five years old or those who cannot medically tolerate. Online memories and condolences may be shared at www.WagleyFuneralHomes.com

ADRIAN &#8211; Our earthly loss is truly heaven&#8217;s gain. Ruth Alvera Merillat, co-founder of Merillat Industries, whose servant&#8217;s heart has forever benefited Lenawee County, passed in to the arms of God on August 19, 2020, from the... View Obituary & Service Information

The family of Ruth A. Merillat created this Life Tributes page to make it easy to share your memories.

Send flowers to the Merillat family.