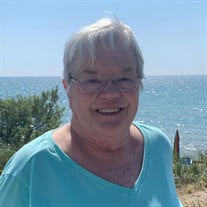 ADDISON- Ruth “Carolyn” Mitchell, 80, of Addison, died early Friday morning, April 8, 2022 at Henry Ford Allegiance Hospital in Jackson, Michigan. Born October 28, 1941 in Findlay, Ohio, Carolyn was the daughter of Dr. Edwin and Ruth (Powell) Lloyd. Carolyn graduated from North Baltimore High School and continued her education to earn Bachelor’s degrees from both Findlay College and Adrian College. She later earned her Master’s degree in Education from Michigan State University. Carolyn was an Educator for Addison Public Schools for over 42 years, where she touched the lives of many young elementary school students. She particularly enjoyed helping young children with their reading and math skills. She was a lifetime member of the Michigan Educators Association (MEA) and the National Educators Association (NEA). On January 26, 1964 Carolyn married William “Bill” Mitchell in North Baltimore, Ohio. Together they were blessed with over 46 years of memories and raising their four children. Bill preceded her in death on January 30, 2010. Carolyn was a faithful member of the Rollin Center United Methodist Church. Prior to that, she and Bill were members of the Addison United Church, where she active in the Women’s Fellowship Group. She was also a member of the Addison Women’s Club. In her spare time, she enjoyed gardening, bird watching, reading, and playing cards and dice. Above all else, Carolyn’s family was her priority in life. She treasured the time she spent with her grandchildren. Carolyn is survived by her four children, Laura (David) Boomer of Eaton Rapids, Jennifer (Tom) Gaff of Shelby Township, Claire (Mike) Warner of Onsted, and William “Pat” (Tamara) Mitchell of Addison; twelve grandchildren, Courtney (Blake) Howe, Alec Boomer, Liam Boomer, Mitchell Gaff, Lauren Gaff, Jessica (Balaji) Venuthurumilli, Nicole Warner, Kelsey Warner, Carly (Zachary) Tucker, Anthony (Nikki) Olson, Emily (Justin) Hunt, and Ava Mitchell; five great-grandchildren, Evelyn, Anthony, Jr., Tara, Sahiti, and Bradley; and her siblings, Jane (Silas) Carmean of Mansfield, Betty (Scott) Miller of Springboro, OH, Bobbi Skipton of Springboro, OH, and Jim Lloyd of Arizona. In addition to her beloved husband, Bill, Carolyn was preceded in death by her parents and her brother, Edwin Lloyd. Per Carolyn’s request, cremation will take place. A Celebration of Life for Carolyn will take place on Friday, May 6, 2022 at 11:00 a.m. at Rollin Center United Methodist Church in Manitou Beach with Rev. Robert Dister officiating. A memorial visitation will be held on Thursday, May 5, 2022 from 3:00-8:00 p.m. at Wagley Funeral Home, Adrian. To honor Carolyn, the family suggests that memorial contributions be made to the Shriner’s Hospital or the University of Michigan Cancer Center. Donations will support the Lung Cancer Research Fund at the University of Michigan. Checks may be made to “University of Michigan” and sent to the Michigan Medicine Office of Development, 777 E Eisenhower Pkwy, Ste 650, Ann Arbor, MI 48108. You may also call 734-764-6777. Friends and family may also use the giving link listed if they wish to make gifts online in memory of Carolyn - victors.us/ruthmitchell Online condolences and memories may be shared at www.WagleyFuneralHomes.com.

The family of Ruth "Carolyn" Mitchell created this Life Tributes page to make it easy to share your memories.

Send flowers to the Mitchell family.