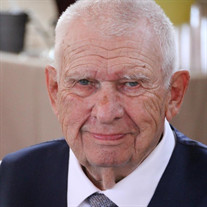 OTTAWA LAKE – Russell Clarence Myers, 89, formerly of Ottawa Lake, Michigan died late Thursday evening, March 17, 2022 at Aspen Grove Assisted Living in Lambertville, MI under the care of ProMedica Hospice. Russell was born on November 14, 1932 the youngest son of Clarence and Ella (Frank) Myers. He attended Blissfield High School where he was involved with the Future Farmers of America and graduated with the Class of 1950. On June 24, 1960 Russell married Elona Knoblauch in Riga, MI and they have been blessed with over 60 years together. Russell always loved the “small town” life where you could get in your car and drive, looking at the crops and finding a little diner where you could get a great home cooked meal. Farming was a way of life for Russell, where he raised crops, hogs and beef cattle for many years. He loved tinkering with antique tractors and anything agricultural, especially John Deere related, including a collection of toy tractors. Russell was known to have some strong opinions and his family can vouch that he could debate on any topic of discussion. An avid card player, Russell was especially good at Euchre and would host gatherings on New Year’s Eve where family and friends would gather to throw cards and share some laughs. He was a dedicated Detroit Tigers Fan and enjoyed driving his 2002 Cadillac DeVille when the weather was good. Always interested in history, Russell had many memories of a trip he and Elona took to Germany where he stood outside the Brandenburg Gate in Berlin. In addition to his wife, Elona, Russell is survived by their children, Luanna Myers, Sherri (David) Jastrzenski, Steven (Hannah) Myers and Debra (Chad) Fredericks; grandchildren, Sydney and Abigail Fredericks; and brother, Edward Myers. He was preceded in death by his parents and a son, Douglas Russell Myers. Funeral services will be held on Wednesday, March 23, 2022 at 11:00 a.m. at Wagley Funeral Home, Tagsold Chapel in Blissfield. Burial will follow at Whiteford Union Cemetery. Visitation will take place on Tuesday, March 22, 2022 from 4 – 7 p.m. at the funeral home and again on Wednesday from 10 a.m. until the start of the service. Memorial contributions may be made to ProMedica Hospice. Online condolences and memories may be shared at www.WagleyFuneralHomes.com.

The family of Russell Clarence Myers created this Life Tributes page to make it easy to share your memories.

Send flowers to the Myers family.