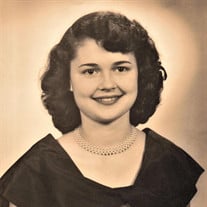 ADRIAN – Ruby Ford, age 85, of Adrian, died Sunday evening, May 30, 2021, at her home while under the care of Hospice of Lenawee and surrounded by her loving family. She was born March 28, 1936 in Welsh, LA, the only child of Abie and Ivy (Demaret) Soileau. She met Michigan-native Gerald Ford while he was stationed at the Lake Charles Air Force base in Louisiana and they were married on June 12, 1959 in Jennings, LA. Ruby was known as a gifted cook, enjoyed working in her gardens and had a profound interest in genealogy. She researched and discovered the history of her ancestors as well as those of her husband Gerald’s. Catholic by faith, Ruby was a parishioner of Holy Family Parish, St. Joseph Campus in Adrian. Ruby was perhaps best known for her avid interest in animal welfare. Her compassion for all animals led to her unwavering involvement in animal rescue and adoption. Surviving to mourn her loss is her husband of almost 62 years, Gerald, their three children, Janet Ford of Adrian, Christina Ford (Arthur Steuer) of New York City, NY, and Kathleen Ford (Joe Brown) of Adrian; and three grandchildren, Nicholas Ford, Sydney Brown and Isabella Brown, all of Adrian. She was preceded in death by her parents. Per Ruby’s wishes, cremation will take place with no public services to be held. Arrangements were entrusted to the care of Wagley Funeral Home, Adrian, where online condolences and memories may be shared at www.wagleyfuneralhomes.com. Memorial contributions can be made in Ruby’s honor to Hospice of Lenawee, Katsnips.org and St. Jude Children’s Research Hospital.

The family of Ruby Marie Ford created this Life Tributes page to make it easy to share your memories.

Send flowers to the Ford family.