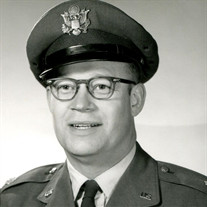 ONSTED –Ross G. Vincent, age 95, passed away Sunday, November 24, 2019, at Tecumseh Place II under the care of his family and Hospice of Lenawee. He was born November 20, 1924, in Kendalville, IN, the only child of Frank and Marguerite (Grove) Vincent, and graduated from Hillsdale High School in 1942. A proud patriot, Ross served in the United States Army Air Corps during World War II as Lead navigator in the 313th Bomb Wing, 13th Air Force and was stationed in the South Pacific Theater. Following his tour of duty he became a member of the Air Force Reserves for the next twenty five years, retiring in 1968 as Lieutenant Colonel. While in the military Ross attended University of Toledo, the Army Air Corps Flying School, Air University and Indiana University; and later completed the University of Wisconsin School of Banking program. On March 14, 1987, Ross married Barbara Beebe VanEtten, and she survives. During their 32 years together Ross and Barb enjoyed extensive travels within the United States as well as abroad. After his military retirement, Ross worked in banking and finance for several organizations including Peoples Finance Service Inc., Credit Bureau of Hillsdale County and Onsted State Bank where he retired as Sr. Vice President. Ross was also an active community member serving in many organizations including the Lions Club, Civitan Club, Hillsdale Area Boy Scouts, Onsted Kiwanis Club, Cambridge Township Planning Commission and Michigan Bankers Association. Ross was also an animal lover. His hobbies included collecting classic cars and antiquing. In addition to his wife Barb, he is survived by his children: Renee (Mike) Riley, Beth (Rick) Arnold, Ron (Sheila) Vincent, Betty (Mike) Kozak, Becky Garcia, Laura (Jon) Harris, James VanEtten and David VanEtten; 23 grandchildren; 27 great grandchildren and 2 great great grandchildren. He was preceded in death by a daughter, Rhonda Foster and a grandson Ryan Englehart. Funeral services will take place at 12 p.m., Friday, November 29, 2019 at Wagley Funeral Home in Adrian with Rev. Linda Farley officiating. Burial will be private. Visitation will be held at the funeral home Friday from 10 a.m. until the service. Contributions in memory of Ross are suggested to Hospice of Lenawee or Lenawee Humane Society. Online condolences and memories may be shared at www.WagleyFuneralHomes.com.

ONSTED &#8211;Ross G. Vincent, age 95, passed away Sunday, November 24, 2019, at Tecumseh Place II under the care of his family and Hospice of Lenawee. He was born November 20, 1924, in Kendalville, IN, the only child of Frank and Marguerite... View Obituary & Service Information

The family of Ross G. Vincent created this Life Tributes page to make it easy to share your memories.

Send flowers to the Vincent family.