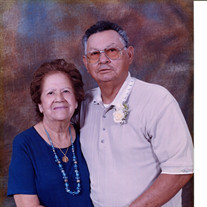 BLISSFIELD – Rose M. Rodriguez, age 93 formerly of Blissfield, passed away Wednesday, June 6, 2018, at Flower Hospital with her family by her side. She was born January 1, 1925, in Toledo, Ohio, the daughter of Jesse and Frances (Yepes) Montes. Rose met the love of her life, Henry Rodriguez, and they were married on September 3, 1941, in Toledo, Ohio. They enjoyed 69 years together before his passing on May 12, 2011. Rose was happiest spending time raising her children alongside her husband Henry. Once she had grandchildren, she made sure that the family traditions were strong by always bringing everyone together. Rose religiously spent her nights reading her Bible. She cherished the time she got to spend with her family and was a great mother to her dogs throughout the years. Rose’s dedication and love for her family will be missed by her children, Henry (Norma) Rodriguez, Sr., Jesse (Peggy) Rodriguez, Arthur (Wiltrud) Rodriguez, Olivia Dowling, Robert Rodriguez, Dolores (Roger) Sandefer, Richard Rodriguez and Frances Pike; 17 grandchildren, plus great grandchildren. She was preceded in death by her parents, Jesse and Frances Montes, husband, Henry Rodriguez, sister, Juanita Gonzales, brother, Joseph Montes, son-in-law, Jerry Dowling, grandson, Allan Michael Crum, Jr., and granddaughter, Ashley Rodriguez Mass of the Christian Burial will take place at 11 a.m., Monday, June 11, 2018 at Light of Christ Catholic Parish in Blissfield with Rev. Jeffrey Poll as celebrant. Burial will follow at Pleasant View Cemetery. Visitation will be held at Wagley Funeral Home, Tagsold Chapel in Blissfield on Sunday, June 10, 2018, from 2 to 6 p.m., with a Rosary Service at 5 p.m.; and visitation again on Monday at the church from 10 to 10:45 a.m. Contributions in memory of Rose are suggested to Light of Christ Catholic Parish in Blissfield. Online condolences and memories may be shared at www.wagleyfuneralhomes.com.

BLISSFIELD &#8211; Rose M. Rodriguez, age 93 formerly of Blissfield, passed away Wednesday, June 6, 2018, at Flower Hospital with her family by her side. She was born January 1, 1925, in Toledo, Ohio, the daughter of Jesse and Frances (Yepes)... View Obituary & Service Information

The family of Rose Montes Rodriguez created this Life Tributes page to make it easy to share your memories.

Send flowers to the Rodriguez family.