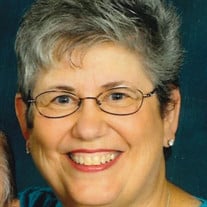 ADRIAN— Rosalyn Green, 76, of Adrian, died peacefully Tuesday morning, February 25, 2020, at the Hospice of Lenawee Home in Adrian. She was born January 23, 1944, in Adrian, to Robert and Caroline (Hagadorn) Brown. Rosalyn graduated with the Sand Creek High School class of 1962. On April 10, 1965, she married Robert “Bob” Green at the Adrian Baptist Church. They would have celebrated 55 years of marriage this April. She worked as a secretary at Siena Heights University and Bixby Hospital. Rosalyn had a very outgoing personality; she was involved in many clubs and activities. She was a member of the Torchbearer Sigma Chapter of Beta Sigma Phi Sorority for over 50 years and active with the Adrian Arbor Gleaners. She enjoyed spending time with family, wintering in Florida for 12 years, and going to the family cabin in Harrison any chance she got. She also enjoyed traveling. In addition to her husband Bob, survivors include her sons, Jason (Amy) Green of Midland, MI and Kevin (Tonya) Green of Jasper, MI; eight grandchildren, Emily Rose, Hailey, Caleb, Sarah, Hunter, Heath Green and Emily Nicole and Ryan Kellogg; her sister in law, Alice Jean Brown of Jasper and four nephews and their families. Rosalyn was preceded in death by her parents, sister, Joan Brown; brother, Gerald “Jerry” Brown and daughter in law, Barb Green. A funeral service for Rosalyn will be held on Saturday, February 29, 2020 at 2 p.m. at the Wagley Funeral Home with Rev. Larry Betz officiating. Burial will follow in Lenawee Hills Memorial Park in Adrian. The family will receive friends for visitation on Friday, from 2 to 8 p.m. at the funeral home. Memorial contributions may be made to the Hospice of Lenawee. Envelopes will be available at the funeral home. Online memories and condolences may be shared at www.WagleyFuneralHome.com

The family of Rosalyn Green created this Life Tributes page to make it easy to share your memories.

Send flowers to the Green family.