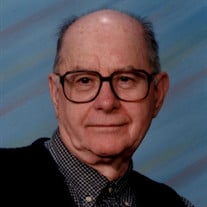 Rev. Ronald Keith Smith’s Obituary January 26, 2017, Rev. Ronald Keith Smith departed this life to enter into eternal life with his Savior, Jesus Christ, who died for his sins. He was born in Wauseon, OH, February, 10, 1924, the son of Fred C. and Onalee (Ballard) Smith. He spent the early part of his life in Fort Wayne, IN, moving to Adrian in 1940, where he met and married Dessolee Obenour in 1946. He served in the army during World War II in France and England. In March of 1951 he received Jesus Christ as his personal Savior. He soon felt the call to the ministry. He and Dessolee left Adrian in 1953 and attended Grace Bible Institute (now Grace University) in Omaha, NB. He graduated in 1958 and served in churches in Iowa, PA, and MI. He was preceded in death by his wife, Dessolee (Dee), his parents, brothers - Fred, Dallard, Fritz, and Terry, and a sister, Sharon Hyder. He is survived by two daughters, Linda (Click) Roth (Michael) of Adrian and Marilyn Kay Smith of Adrian and one son, Norman of Adrian, three grandsons, four granddaughters, and 12 great grandchildren. The Lord Looked Down The Lord looked down from Heaven above; To speak to my soul in wondrous love. He set His special mark on me; That shall remain throughout eternity. He gave me labor here and there; That I may win others to that land so fair. Then He called me to my rest; In the mansion for the blest. Now in His presence I shall be; Looking upon His face throughout eternity. RKS Keith wrote this poem about his own life during the time he was pastoring in Auburn, PA. A Gathering of Family and Friends will take place at Wagley Funeral Home, at a later date.

The family of Ronald "Keith" Smith created this Life Tributes page to make it easy to share your memories.