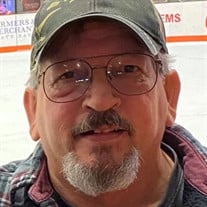 PALMYRA- Roger Lee Whitehead, age 56 of Palmyra, passed away unexpectedly on Sunday, January 5, 2020. Roger was born on January 16, 1963, in Adrian to Lyle and Sheila (Varney) Whitehead. He attended Onsted Schools through the 11th grade and enjoyed playing the saxophone in the high school band. Roger graduated from Adrian High School with the Class of 1981, after his family moved from the Onsted area. On August 27, 1988, Roger married Janis Wright and they have enjoyed 31 years together. Being an over-the-road trucker has kept Roger busy for many years; having worked the last 3 years for Continental Carbonic, based out of Albion, MI. Roger treasured time with his family and enjoyed being a father and grandfather. An animal lover at heart, there was always a pet dog in Roger’s life. Roger never knew a stranger and made friends wherever he went. His easy-going personality was evident in the way he talked with everyone and a simple trip to Meijer’s could last for hours when visiting. Survivors include his wife, Janis; children, Derek Whitehead (fiancée Rachel) and grandson, Parker; and Michelle Whitehead (Julian); sister, Rhonda (Gary) Hosler; and nephews and niece, Robbie, Daniel, Conner, Gary and Alyssa. He was preceded in death by his parents; brother, Gary; and siblings who passed in infancy, Dale and Beverly. Funeral services for Roger will be on Friday, January 10, 2020, at 12 p.m. at Wagley Funeral Home, Adrian, with Pastor Lynn Brooks officiating. Visitation will be from 10 a.m. until the time of the service. Memories and online condolences may be shared at www.WagleyFuneralHomes.com.

PALMYRA- Roger Lee Whitehead, age 56 of Palmyra, passed away unexpectedly on Sunday, January 5, 2020. Roger was born on January 16, 1963, in Adrian to Lyle and Sheila (Varney) Whitehead. He attended Onsted Schools through the 11th grade and... View Obituary & Service Information

The family of Roger Lee Whitehead created this Life Tributes page to make it easy to share your memories.

Send flowers to the Whitehead family.