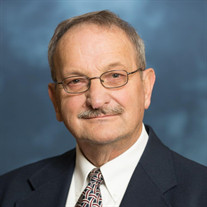 ADRIAN – Roger Lee Brock, 73, lifelong resident of Adrian, died Wednesday morning January 19, 2022 at the Hospice Home of Lenawee surrounded by his family. Born July 10, 1948 in Adrian he was the son of Charles and Shirley (Flint) Brock. He was a proud Adrian Maple, graduating with the class of 1966. Roger earned his Bachelor’s Degree in Business from Ferris State. On August 28, 1970 Roger married the love of his life, Cindy Smith. She survives to cherish over 52 years of love and memories. Roger made his career in sales. He was an excellent salesman for Adrian Chrysler, WABJ, and Hadden Tire. Roger spent the majority of his sales career at Dave Knapp Ford, where he was employed for over 16 years. Following his retirement, Roger joined the staff at Wagley Funeral Home. He attended the First Presbyterian Church of Adrian. He was also an active member of the Jaycees, Moose Club, and Eagles Club. Roger and Cindy enjoyed wintering in Florida. In his spare time, Roger loved to play golf and was an overall sports enthusiast. He valued spending time with his beloved family. In addition to his wife, Cindy; Roger is survived by his children, Kaleb (Eralynn) Brock of Adrian and Jennifer (Mark) Chittenden of Adrian; grandchildren, Kaden and Myah Brock; and his sister, Sharon (Bill) Smith. He was preceded in death by his parents; brothers, Frank Fox and Virgil Fox; and his sister, Evelyn Sheffield. The family will receive friends for visitation on Saturday, January 22, 2022, from 11:00 a.m. until 2:00 p.m. at the Wagley Funeral Home, Adrian. The family has asked that you take the time to remember Roger by doing a random act of kindness to someone in need. Memorial contributions may be made to Hospice of Lenawee. Online condolences and memories may be shared at www.WagleyFuneralHomes.com.

ADRIAN &#8211; Roger Lee Brock, 73, lifelong resident of Adrian, died Wednesday morning January 19, 2022 at the Hospice Home of Lenawee surrounded by his family. Born July 10, 1948 in Adrian he was the son of Charles and Shirley (Flint) Brock.... View Obituary & Service Information

The family of Roger Lee Brock created this Life Tributes page to make it easy to share your memories.

Send flowers to the Brock family.