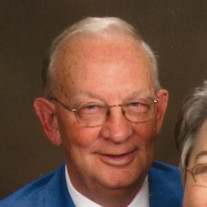 FAYETTE, OH – Roger U. Borton, 85, of Fayette, died Wednesday evening, February 23, 2022, at St. Luke’s Hospital in Maumee, with his family by his side. Born April 14, 1936, in Franklin Township, Ohio, he was the son of Ulna and Elvera (Rohrs) Borton. Roger was a proud 1955 graduate of Gorham Fayette High School. He enlisted in the United States Army and proudly served his country for several years while being stationed in Germany. On April 23, 1960, Roger married Patricia Dibble at the Tipton Community Church. She survives to cherish over 61 years of love and memories. Roger was employed at Morenci Rubber, where he worked for over 31 years until the company’s closure. Roger and Pat then relocated to Monroe, North Carolina where he was employed by the Scotts Company for several years, prior to returning to the area. He began working at Kamco in West Unity in 1995 and continued his employment there until his formal retirement in 2000. He was an active member of the Fayette United Methodist Church for over 50 years, where he served as Lay Leader, Sunday School Teacher, and choir member. Roger served as a Village Council member during the 1970s and was active in the planning of the Bicentennial Celebration. Roger and Pat also enjoyed ten years wintering in Lakeland, Florida, where they were active in their retirement community. In his spare time, Roger enjoyed golfing, fishing “up north,” and gardening. He was an avid Tigers and Buckeyes fan. In his younger years, he was active in coaching little league. His greatest joy was spending time with his family; watching his children grow and spending time at his grandchildren’s sporting events. In addition to his beloved wife, Pat, Roger is survived by their three children, Robin (Dale) Pfund of Fayette, Kelly Borton of Birmingham, AL, and Troy (Gay) Borton of Monclova; grandchildren, Tricia Pfund (fiancé, Eric), Katie Pfund (fiancé, Andrew), Hailey Oeder, Caleb Oeder (fiancée, Kenzie), and Madi Borton; sister, Brenda Humbert of Fayette; brother-in-law, Herb Simon of Tecumseh; and many nieces and nephews. Roger was preceded in death by his parents; siblings, Phyllis Simon and James (Rita) Borton; and in-laws, Merrick and Shirley Dibble, Bill Humbert, and Mary Lou (Donald) Sutherland. Per Roger’s request, cremation will take place. A memorial service for Roger will be held at the Fayette United Methodist Church on Monday, February 28, 2022, at 2:00 p.m. with Rev. Jeff Bandy, officiating. A memorial visitation will take place on Sunday at the Fayette UMC Family Life Center from 1:00-4:00 p.m. Burial of ashes will take place in a private family ceremony in the Spring of 2022 at Pleasant View Union Cemetery. To honor Roger’s memory, the family suggests that memorial contributions be made to the Family Life Center. Wagley Funeral Home, Adrian, MI has been entrusted with arrangements, where online condolences and memories may be shared at www.WagleyFuneralHomes.com.

The family of Roger Borton created this Life Tributes page to make it easy to share your memories.

Send flowers to the Borton family.